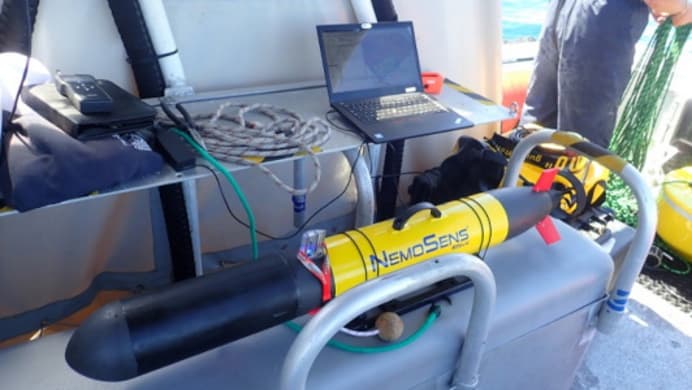 Acoustics and underwater robotics company RTSYS has confirmed that its AUVs (autonomous underwater vehicles) have been deployed to collect environmental data in support of the EU-backed SafeWAVE project, which aims to increase knowledge of the environmental effects and risks of wave energy. SafeWAVE also aims to overcome non-technological barriers that could hinder the future development of ocean energy technologies, which is one of the main pillars of the EU Blue Growth strategy.

The project is centered around the collection, processing, analysis and sharing of environmental data from devices operating at sea, and the modelling of cumulative impacts of future larger scale deployments. Data is being collected around GEPS Techno’s WAVEGEM hybrid autonomous energy production platform at the SEM-REV offshore test site in France.

During the offshore operation, RTSYS deployed its COMET-300 AUV, equipped with a side scan sonar, to record data on the underwater conditions near WAVEGEM. A second AUV with an experimental acoustic sensor, the NEMOSENS, was also deployed during the measurement campaign.

The data collected will now be analysed and compared with those obtained on the other test sites as part of the project, to give an overview of the impact of the activities on soil integrity and the underwater acoustic environment.

The SafeWAVE project builds on the results of the previous WESE project, with a renewed aim of developing an ‘Environmental Research Demonstration Strategy’ based on the data that will be collected in wave energy sites from different European countries where wave energy devices are currently operating.