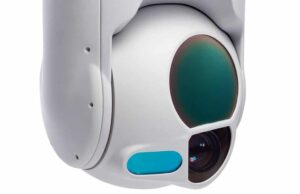 Trillium Engineering, a developer of gimbaled camera systems for small unmanned aircraft systems (UAS), has announced that it has successfully completed a test flight of a new video processor designed to improve the operation of Group 2 UAS.

Many full-motion video camera systems flown on tactical UAVs use the H.264 video compression codec standard, which provides a picture that is considered good enough for close targets but too fuzzy for long-range operation due to the reduced bitrate, which causes critical information to be dropped from the image.

Trillium Engineering decided to adapt its HD80-MV gimbaled camera with a video processor capable of handling the newer H.265 standard. The system was mounted on a Cessna aircraft, which served as a stand-in for a similarly-sized Group 2 UAV. The gimbal payload was controlled from a laptop on the ground. The resulting streaming midwave IR and electro-optical imagery was 50 percent clearer than that produced with the previous codec standard.

Find suppliers and manufacturers of gimbal camera payloads for UAVs >

“You can’t tell, for example, if the person you are monitoring is holding a rifle or a shovel. This means that you have to scrub some missions because you can’t make a positive identification. When the plane was in the air, we reduced the bit rate to mimic a UAS that was further away. Then we switched the standard from H.264 to H.265. The difference in the picture was remarkable,” explained Rob Gilchrist, president of Trillium Engineering.