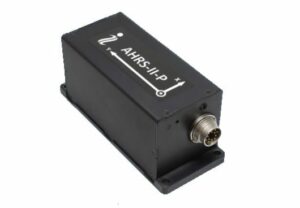 Inertial Labs has announced the release of a new version of its AHRS-II-P Attitude and Heading Reference System model, adding the ability to blend in data from an external single or dual antenna GNSS receiver. The system is ideal for providing absolute orientation for a wide range of unmanned systems, including UAVs (unmanned aerial vehicles), UUVs (unmanned underwater vehicles) and UGVs (unmanned ground vehicles).

The Inertial Measurement Unit component of the system is a tactical grade IMU developed by Inertial Labs, which is a highly suitable fit for tactical guidance, navigation, flight control, stabilization, pointing systems and other applications. With Angular Rates and Accelerations data transfer rate reaching up to 2000 Hz, the low power consuming IMU provides an excellent SWAP-C advantage over legacy IMUs based off tactical grade fiber-optic gyros (FOG).

AHRS-II-P employs an 8mm Fluxgate gyro-compensated Magnetic Compass which has a distinct advantage over commonly used magneto-inductive or magneto-resistive magnetometers. Taking in data from an external GNSS receiver, AHRS-II-P is able to update the magnetic declination value automatically. With 0.2 nT Bias in-run stability and 0.3 nT√Hz Noise density, the fluxgate gyro-compensated magnetic compass of AHRS-II-P has excellent stability and repeatability.

With sophisticated internal calibration algorithms, the AHRS-II-P requires no additional equipment for field calibration. A quick calibration procedure is followed once the AHRS-II-P is mounted onto a moving base, and allows for calibrating the unit during its ordinary operation with no interruption of on-going orientation calculation and output.