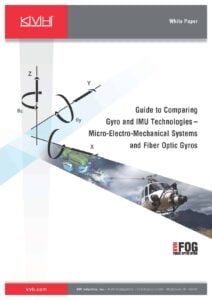 KVH Industries, Inc., a developer of sensors and integrated inertial systems, has released a technical whitepaper that offers guidance to engineers designing gyro-stabilized systems for manned or unmanned applications.

Designers and engineers must compare the attributes of various gyro technologies, to determine which sensors meet the required performance and accuracy requirements; therefore a reliable means of comparing common critical performance parameters is an important tool.

The future of driverless vehicle technology requires the superior bias and scale factor stability offered by high performance FOGs and FOG-based IMUs. These applications
include driver-assist systems for self-parking, collision avoidance, and auto-braking, as well as vehicle-to-vehicle applications such as safe road trains and connected driver systems.

MEMS-based IMUs are commonly used for industrial-grade applications including miniaturized AHRS, and low/moderate pointing and positioning systems. MEMS are being tested for short-term mission duration, stabilization, control, and navigation of GPS/sensor-aided autonomous platforms.