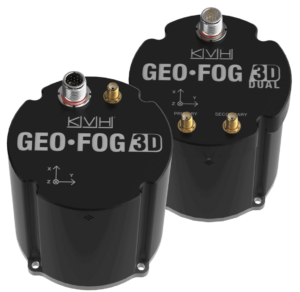 KVH has also introduced a variant, the GEO-FOG 3D Dual, an INS and attitude and heading reference system (AHRS). This product features two GNSS antennas on a fixed RTK baseline that offers the same reliability and performance levels as the GEO-FOG 3D, with increased heading, pitch, and roll accuracy for static and dynamic applications where single antenna systems can be problematic. The GEO-FOG 3D Dual designed for applications that require heading at system startup or in low dynamic conditions.

“KVH’s GEO-FOG 3D and GEO-FOG 3D Dual provide exceptional accuracy and outstanding performance in a single, small package (<1.6 lbs.), at price points never previously achieved in the industry,” says Jay Napoli, KVH’s FOG/OEM vice president. “And, because KVH controls the entire design and production process, from creating its own optical fiber to packaging its FOGs together with other sensors for advanced applications, these new products – and all of our open-loop FOGs, IMUs, and INSs – offer outstanding accuracy and excellent durability at a lower cost than competing systems.”

Reliable, high-accuracy navigation and control are essential to unmanned, autonomous, and manned platforms that must operate in conditions that include magnetic interference and the absence of reliable satellite navigation data. The integrated FOG, GNSS, and sensor fusion technologies allow the GEO-FOG 3D and GEO-FOG 3D Dual to achieve performance levels that are beyond typical INS- or MEMS-based solutions.

Both the GEO-FOG 3D and GEO-FOG 3D Dual are designed to support current and future satellite navigation systems including GPS, GLONASS, GALILEO, and BeiDou. Both systems offer data rates up to 1000 Hz, and the ability to output data over a high-speed RS-422 interface or RS-232 interface, which ensures the systems can be easily and readily integrated in a wide range of platforms.