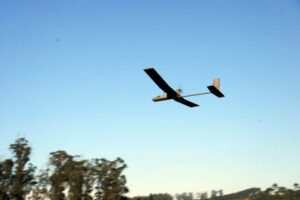 TEKEVER has conducted a week of intensive trials of the AR4 Light Ray UAS for the Colombian Armed Forces, to demonstrate the system’s powerful capabilities for intelligence, surveillance, target acquisition and reconnaissance (ISTAR) missions, under the extreme altitude and weather conditions of Colombia.

With very intense military activity against guerrilla forces and narco traffic groups, the Colombian Armed Forces are faced with the need to carry out ISTAR missions under extreme weather and geographic conditions. The Colombian landscape features high altitude mountains that create unpredictable weather, prone to swift changes and strong winds. These conditions, coupled with very dense vegetation, present the Colombian Armed Forces with a challenge when operating Unmanned Aerial Systems.

The technical trials were performed at high altitudes, around 3000 meters (about 10.000 feet), in the heart of the mountainous region surrounding Bogotá.

“The trials were a complete success,” said Ricardo Mendes, TEKEVER Group COO. “We met and exceeded the goals we had planned for, by demonstrating the usage of the system to perform multiple types of missions in one of the most challenging environments in the world.”

In partnership with the Aviation Global Group, TEKEVER’s AR4 Light Ray demonstration followed a special invitation from the Colombian Armed Forces in November 2012 to see first-hand the outstanding performance of the system, after its global market launch at the 2012 Farnborough International Air Show.

The Colombian Armed Forces retrieved valuable lessons from the demonstrations, which will be instrumental for its ongoing procurement on mini-UASs that are specially designed for surveillance missions and capable of delivering true airborne superiority.

“After these trials, we are extremely confident that our system will be successful in fulfilling the special requirements of the Colombian Armed Forces.”, said Ricardo Mendes. He reinforced that this opportunity to present the AR4 Light Ray UAS to the Colombian Armed Forces represents an important step towards the reinforcement of Portuguese aeronautics in the global aerospace market.