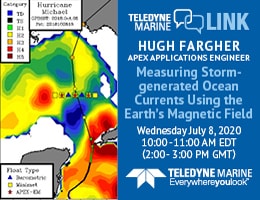 Models to better understand and predict major climate events require ever more precise ocean & atmospheric data. This includes the accurate measurement of ocean current velocities throughout a water column, both before, during and after events such as passing hurricanes. The autonomous drifting ‘Electromagnetic Profiling’ float (APEX-EM) is perfectly suited for such a role. The APEX-EM can precisely measure water velocity using motionally-induced electric fields, which are themselves generated by ocean currents moving through the Earth’s magnetic field. These floats can also be dropped by parachute from aircraft. This makes them particularly suitable for deploying at short notice, such as ahead of major storms, or in hard-to-reach areas of the ocean such as near the polar regions.