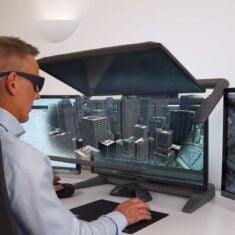 Stereoscopic displays and monitors provide an illusion of real 3D by providing separate offset 2D images to each eye, which the brain combines resulting in the perception that the image has depth. It should be noted that although such displays are commonly referred to as “3D monitors” or “3D displays, they are technically not true 3D, as the images are not displayed in full three-dimensional space and moving the head or eyes will not provide any further image detail that is not already being displayed. True 3D display technologies, such as volumetric and holographic displays, are largely still experimental.

Stereo monitors may also require the use of glasses and goggles to achieve the 3D effect.

3D stereoscopic displays and monitors are commonly used to visualize, analyze and interact with geospatial data captured by drones, including photogrammetry, aerial imagery and 3D LiDAR point cloud data. This data is used for a wide variety of civil applications, including city modeling, surveying, oil and gas, environmental monitoring. It may also be used for military geospatial intelligence (GEOINT) applications such as operations planning and remote sensing for UXO (unexploded ordnance) detection and clearance.