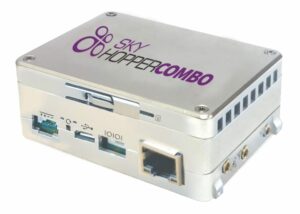 ISM band radios, particularly ones operating in the 2.4 and 5.8 GHz bands, are commonly used for UAV and robotics applications such as drone controllers, C2 links, telemetry and payload data streaming. Flying such drones in urban environments may lead to occasional dropouts due to the presence of many other wireless devices also operating on the ISM bands.

ISM (industrial, scientific and medical) are portions of the RF (radio frequency) spectrum that were originally reserved for non-telecommunications purposes, such as microwave and medical devices. Despite this, they have come to be used for a variety of short-range, low-power wireless communications and IoT (Internet of Things) connection methods such as Bluetooth and Wi-Fi.

There are over a dozen bands reserved for ISM purposes, although the exact frequencies used may vary from country to country. The bands may be used by operations that do not require a government license. Licensed use of ISM is typically low due to the high potential for interference.