The S-100 demonstrated simulated surveillance and protection of the approaches to a strategic port, and also showcased ISR, SAR and cargo delivery capabilities schiebel-group News By Mike Ball / 21 Oct 2022 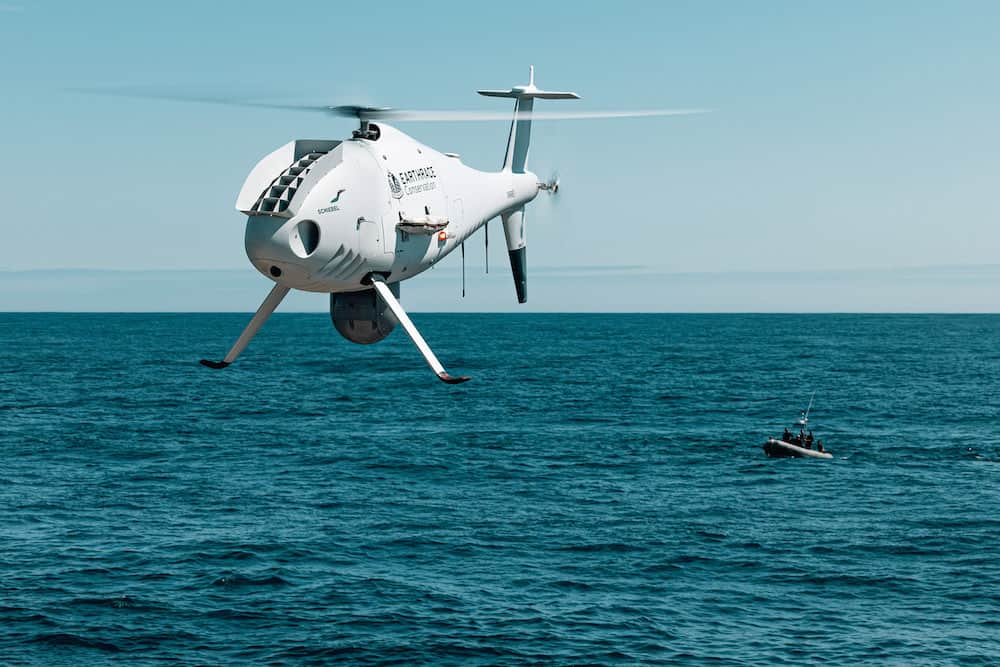 Schiebel, in conjunction with Thales, has confirmed that it has successfully demonstrated Anti-Submarine Warfare (ASW) capabilities with its CAMCOPTER S-100 UAS (unmanned aerial systems) during the REPMUS (Robotic Experimentation and Prototyping using Maritime Uncrewed Systems) and Dynamic Messenger 2022 exercise.

The successful operational capability demonstrations of the S-100 were part of a larger annual NATO exercise showcasing unmanned systems and how the very latest technological advancements can be incorporated into the platforms for real-world operational benefit.

UAS have traditionally focused on delivering ISR (Intelligence, Surveillance and Reconnaissance), but now Schiebel, working with Thales, are developing an ASW capability, which was tested for the first time during this NATO exercise. The demonstrated scenario was the surveillance and protection of the approaches to a strategic port. With a barrier of sonobuoys already laid, the S-100, equipped with a Wescam MX-8 EO/IR sensor in the nose and a Thales BlueScan data relay sensor, was deployed to monitor the transmission of data from the sonobuoys and relayed it to the command cell ashore, permitting the detection and classification of possible enemy submarines.

The major NATO exercise also enabled the CAMCOPTER S-100 to show its existing prowess completing ISR, Search and Rescue (SAR) and cargo delivery operations. Equipped with an Overwatch Imaging PT-8 Oceanwatch and a Wescam MX-10, the S-100 showed how easily it could automatically detect and identify small objects at sea in various sea states, as a valuable part of ISR and SAR missions. With its suspended cargo delivery net, the CAMCOPTER S-100 also successfully delivered medical supplies from the port to a ship nearby.

Hans Georg Schiebel, Chairman of the Schiebel Group, said: “It was an honour to participate in this year’s NATO’s exercise in Portugal. Together with Thales and the UK Royal Navy, we successfully completed numerous flight trials of the S-100, showcasing a variety of impressive capabilities. I am very proud to be able to state that with several hundred thousand flight hours under its belt, the CAMCOPTER S-100 is the only established and operationally proven UAV of its class.”