The Penguin C Mk2 VTOL’s state-of-the-art AEROFLOW Boom Technology enables a 20% increase in flight endurance. This patented technology uses hoods over the vertical lifting rotors that automatically enclose the rotors while the vehicle is in horizontal flight, significantly reducing drag and allowing the UAV to achieve a flight time of over 14 hours.

The VTOL booms are made of advanced carbon-fiber composite for maximum strength and rigidity despite its light weight. Battery replacement is a simple process that can be done in under two minutes, minimizing delay between flights. With the added weight of the booms to enable VTOL operations, the Penguin C Mk2 VTOL just falls into the Group 3 UAS category with an MTOW of 32kg / 70.6 lbs.

The Penguin C Mk2 VTOL UAS offers one of the smallest logistical footprints in its class. A full system consists of 3 aircraft, 3 high performance EO/IR Epsilon gimbals, 1 ground control station (GCS), and 1 MIMO tracking antenna. The entire system can be transported in just five Pelican cases and allows for rapid and easy assembly.

The Penguin C Mk2 VTOL has a 4.5kg / 9.9 lb payload capability and comes with one of UAV Factory’s high performance EO/IR gyro-stabilized payloads. The Epsilon 180 gimbal from Octopus ISR, with stabilization of 40 uRad jitter, is the most advanced ISR payload that can be paired with the Penguin C Mk2 VTOL. It features a cooled MWIR thermal imager with continuous 15x optical zoom, a long range 90x zoom, and 4K daylight camera. Other smaller EO/IR payloads, such as the Epsilon 140 series, are also available. The aircraft features a swappable payload nose cone, which can be changed out in less than two minutes. The nose cone is gyro-stabilized in roll axis, adding unparalleled stabilization axis to any payload the aircraft carries.

UAV Factory will exhibit the Penguin C Mk2 VTOL aircraft at their booth at the AUVSI XPONENTIAL event in Atlanta. 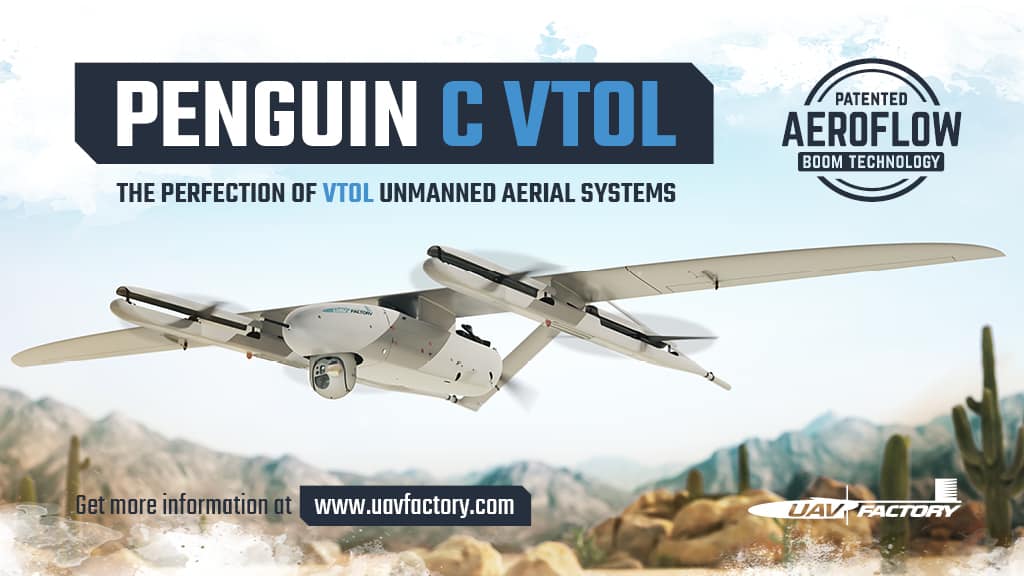