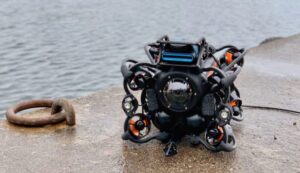 The ROVs’ 8 thruster DVC (dynamic vector control) and advanced programming enables the SRV-8 to be easily manipulated in most current conditions and underwater environments. This battery-operated ROV provides up to 6 hours of mission time on a single charge and is depth rated at 305 meters.

The subsea work was conducted for The Defense Science and Technology Group (DSTG) at HMAS Stirling in Western Australia, in order to assess the amount of marine bio fouling on the ship’s hull.

The inspection took a day and was considered a success by DSTG as RIS was able to provide an assessment on marine growth in accordance with the Department of Defence’s reporting structure.

The Director and Chief Pilot, Neil O’Grady, said “We are excited to continue working at HMAS Stirling by providing subsea and aerial inspection capabilities for the Department of Defence. It also provides opportunities for a few of our employees who are Royal Australian Navy veterans, to work alongside us in a familiar environment where they really flourish and feel comfortable.”

Learning to fly the SRV-8 underwater drone is simple and takes 3 minutes or less to set-up and deploy. The standard Xbox joystick controller allows for intuitive operation for any marine professional.