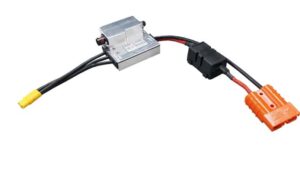 Sky Power has expanded its range of starter generators for UAV (unmanned aerial vehicle) engines with the launch of the SGC 081. This new control unit can be used with fuel injection engines as well as those with carburetors.

The SGC 081 can be used both to start a UAV combustion engine and also as a generator that can charge drone batteries. Depending on cooling arrangements, it is capable of delivering 30 A at 60V, with a maximum power output of 0.5 kW.

The new system has already been successfully trialled in the field on a variety of different projects, including heavy fuel (HF) applications. It can be used with third-party systems in addition to Sky Power engines.

Karsten Schudt, Managing Director of Sky Power GmbH, commented: “The additional Starter Generator Control SGC 081 is lighter than the generator control system we introduced previously. The communication with the engine is also via hall effect sensors.”