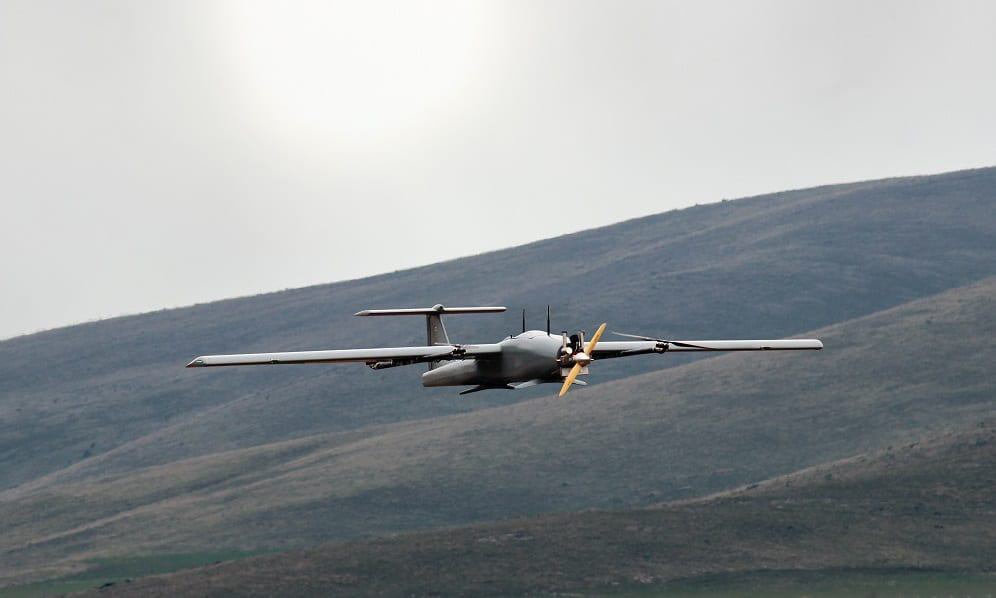 Sky Power, a leading manufacturer of 2-stroke combustion and Wankel engines for UAS,  has announced that UAS manufacturer A-techSYN has developed the first VTOL UAS to be fitted with the SP-110 FI TS 2-cylinder gas engine, which can be deployed both for vertical drive and for power generation. The new UAS was introduced at the Xponential 2018 trade show.

A-techSYN’s CGT45-SLT vertical take-off aircraft was equipped with the retrofitted engine as part of the collaboration with 3W-International and Sky Power. “The CGT45-SLT has been used in Turkey for some time now. However, we were looking for a new engine concept in order to increase the range and payload,” explains Gokhan Celik, managing director of A- techSYN. “The standard 3W-110i B2 TS engine’s performance parameters would also have sufficed, but ultimately the choice fell to the SP-110 FI TS from Sky Power,” added Karsten Schudt, managing director of Sky Power.

The CGT45-SLT is a 4.5m wingspan, T-tail UAV. It uses electric powered motors for take-off and landing and does not require a runway or catapult. The VTOL can take off from a table and land with high accuracy on a 5m × 5m surface. It is a composite airframe with 4 kg payload capacity. With the basic set-up, CGT45-SLT uses 3 separate communication systems for datalink, video-link, and the FPV (first-person view). The datalink system operates at 900–922 MHz, FPV at 1.2 GHz, and the video-link at 2.4 GHz. The video-link uses IP communication and 128-bit SSL encryption to secure the data transferred. Video and data may be broadcast if desired. The CGT45-SLT has a 50 kg MTOW (including payload). It can be operated by only two people. The CGT45-SLT is controlled by A- techSYN’s flight controller AvionicsMini. This flight controller uses a CANbus interface to communicate with the new ECU030 engine control unit by Sky Power.

In addition to the ECU030, the SP-110 FI TS is also equipped with Sky Power’s new HKZ215 ignition. “Thanks to the two new systems, the engine can be tuned exactly to environmental conditions as well as to the customer’s wishes,” explained Karl Schudt, managing director at Sky Power. The system has four ignition channels with two separately settable injection nozzles. Pump pressure is regulated electronically. A cold-start function of the engine is possible without further ado. The automatic controller adjusts the fuel mixture to the current cylinder temperature, air pressure, and exterior temperature. The high-performance HKZ system was developed for significantly greater ignition powers. The engine’s overall fuel efficiency is thereby enhanced and the exhaust values improved. “With the new ignition and injection system, we achieve better power performance in 3W engines, plus a significant reduction of fuel consumption,” Schudt added.