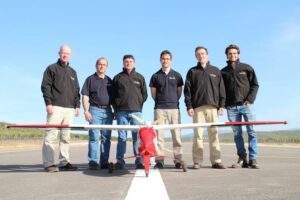 UAV Navigation, a company that manufactures autopilots and other flight control solutions for unmanned aircraft, has succeeded in demonstrating the safe operation of an unmanned aircraft system in flight at 20 km beyond visual range. The flight took place in full compliance with Spain’s strict aviation regulations, and is the first beyond line of sight (BLOS) flight of a drone weighing more than 25 kg in segregated airspace. It is the first flight of its kind to be authorized and executed in Spain, making it an important step for the integration of drones into Spanish airspace.

The flights took place at the ATLAS Test Flight Center located in Villacarrillo, Spain, under the direction of Seville’s Air Traffic Control Center (ACC), and in collaboration with ATLAS and VITO, the Belgian company that has purchased the drone.

The drone, developed by UAV Navigation, weighs 45 kg and cruises at 130 km/h. It has a ceiling of 3,500 m and a range of 400 km. It incorporates a high performance, stabilized day/night camera and has advanced safety measures, including a transponder and a parachute. The autopilot has more than 50,000 flying hours and features both physical and logical redundancy.

In order to obtain flight authorization and a special certificate of airworthiness, a detailed aeronautical safety study of the operation was carried out, taking into account the basic characteristics of the aircraft and its equipment and systems. In order to ensure flight safety, a description of the experimental flights to be executed, flight profiles, operational characteristics, conditions and limitations were also studied and documented.

In addition, the pilots were required to meet all current regulations, including a pilot’s license, medical examination and completion of certification on the UAV platform.