Developing a Custom Canon 5D Gimbal for a Multirotor Drone 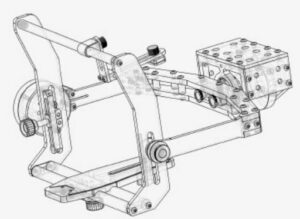 HD Air Studio has released the following case study detailing the creation of a custom gimbal that allowed a multirotor drone developed by VulcanUAV to carry a Canon 5D DSLR camera.

VulcanUAV has already used HD Air Studio gimbals in a variety of projects for a couple of years now. Initially, these were standard, off-the shelf gimbals suitable for a number of cameras on the market. The first custom gimbal commissioned by Vulcan UAV was a front-mounted two-axis unit designed to carry a G300 gas sensing camera.

More recently, VulcanUAV entrusted HD Air Studio with the project of developing a custom camera stabilizer optimized for a Canon 5D camera, which was to be attached to a custom drone produced in-house by VulcanUAV for Perceptual Robotics’ Dhalion autonomous wind turbine inspection system. VulcanUAV required a ready-to-use-out-of-the-box solution to work seamlessly with their API.

A spokesperson from VulcanUAV commented: “The custom gimbal developed by HD Air Studio keeps the camera image perfectly still even with longer focal length lenses. The gimbal offers great resistance in difficult conditions – we mount it to a drone which carries out autonomous inspections of turbine blades and structures both onshore and offshore. The inspection system needs to maintain an image resolution of 3 pixels per millimeter without the need for the aircraft to get too near the turbine blades. At this level of resolution any movement in the camera during the shot will lead to focus issues which cannot be present if the data is to be usable for detailed inspection. The reliability of this camera stabilizer is key to our effective operations.”