The Semi-autonomous Capabilities for the Operation of Uncrewed Teams (SCOUT) effort aims to improve the speed, accuracy, and efficiency of disaster relief efforts through enhanced autonomy capabilities charles-river-analytics News By Phoebe Grinter / 05 Oct 2021 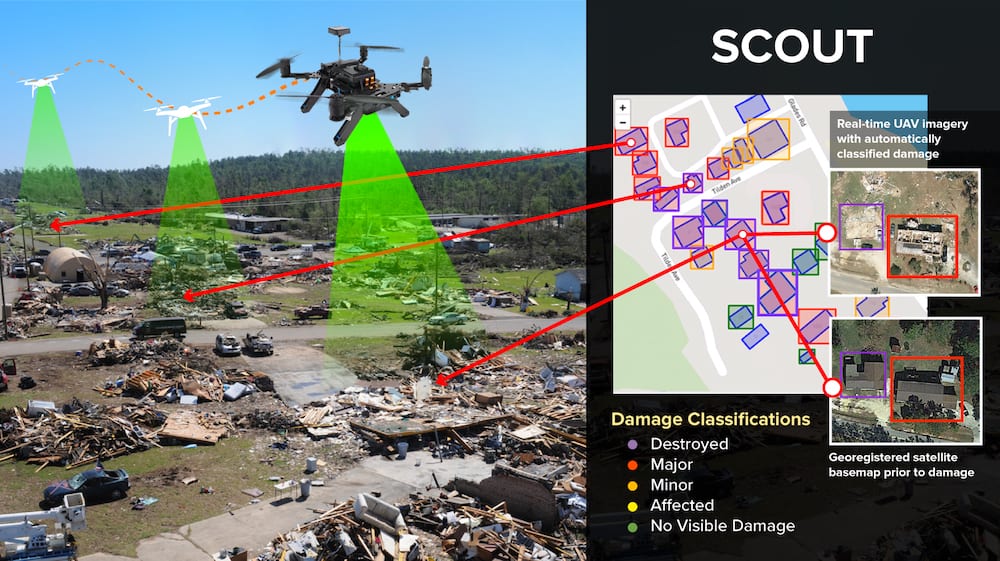 Charles River Analytics has been awarded a $500,000 follow-on contract from the National Oceanic and Atmospheric Administration (NOAA) to develop Semi-autonomous Capabilities for the Operation of Uncrewed Teams (SCOUT), a package of algorithms, swarm control software, and smart sensors.

NOAA’s Weather-Ready Nation initiative aims to reduce the impact of weather, water, and climate events by transforming the way humans receive and act on information. Key to this vision is using Unmanned Aerial Systems (UAS) for a multitude of missions, including weather forecasting, assessing weather damage, and search and rescue. Current UAS missions rely on teams of human operators, planners, and analysts that are in short supply during response operations. The SCOUT effort aims to support response teams by improving the speed, accuracy, and efficiency of these efforts through enhanced autonomy capabilities.

SCOUT’s detection algorithms work with electro-optical, multi-spectral, and infrared imagery. SCOUT effectively detects and characterizes damage from events such as tornadoes, forest fires, hurricanes, and flooding. SCOUT is designed as a modular kit of autonomy software and Commercial Off-The-Shelf (COTS) sensors that can be easily configured to support a wide range of missions.

“In the aftermath of a natural disaster, time is of the essence,” said Daniel Stouch, Director of Space and Airborne Systems in Charles River’s Sensing, Perception, and Applied Robotics Division, and Principal Investigator for the SCOUT effort. “SCOUT saves critical time when assessing disaster relief needs. With SCOUT, disaster response teams with minimal UAS training or experience will easily deploy UAS for information gathering and critical lifesaving operations.”

SCOUT builds on the company’s prior work in Artificial Intelligence (AI)-based autonomy for defense applications, enabling accurate and fast detection of objects of interest for relief efforts without draining scarce first responder resources.