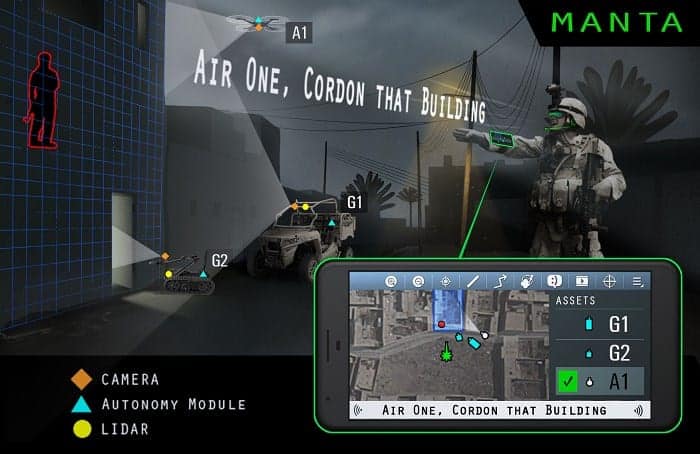 Charles River Analytics, a developer of intelligent systems solutions, has announced that it has received funding through the US Army’s Combat Vehicle Robotics (CoVeR) program to enhance its Modular Appliqué Enabling Natural Teaming with Autonomy (MANTA) system. Consistent with the objective of the CoVeR program to develop technologies that support scalable integration of multi-domain robotic and autonomous systems, MANTA is a platform-independent, natural control and autonomy robot appliqué that enables a user to easily direct one or more host platforms such as UAVs (unmanned aerial vehicles) or UGVs (unmanned ground vehicles) to perform a range of autonomous behaviors.

“With MANTA, our human-machine interface enables Commanders to issue instructions to one or more unmanned robotic systems using the same natural communication method that they use with human personnel,” said Camille Monnier, Principal Scientist at Charles River Analytics and Principal Investigator on the MANTA effort. “Our contributions in manned-unmanned teaming, or MUM-T, enable leap-ahead capabilities in mission-level autonomy.”

Robotic systems equipped with the hardware/software appliqué can execute any behavior supported by platform capabilities, as well as share and access information with other vehicles equipped with the appliqué. Equipped platforms can be controlled using silent gesture-based commands, such as follow-me, stop, and relocate to a different position, or more complex speech-based commands, such as “monitor the back of the red building for activity,” “give me a close-up view of that white van,” and “emplace a remote sensing device in Zone 2.”

Rich Wronski, Vice President of Charles River’s Sensing, Perception and Applied Robotics Division, commented, “MANTA is one of our autonomy components built on mission-focused artificial intelligence that can integrate with current and evolving platforms. By integrating our reliable, adaptable robotic subsystems with their existing platforms, our customers can achieve sought-after mission-level autonomy for single, tele-operated platforms as well as multi-platform, collaborative robotic teams that self-organize around high-level objectives and commands.”