Calculating How Much Weight a Drone Can Carry

In this article, Tyto Robotics offers methods for calculating drone propeller thrust, including using its thrust test stands, to determine how much weight a drone can carry.

Today’s largest drones and eVTOL are capable of carrying thousands of pounds, in the form of humans, cargo and more. But how can we determine how much weight a drone can carry?

The amount of weight a drone can carry first and foremost depends on the amount of thrust produced by its propellers. 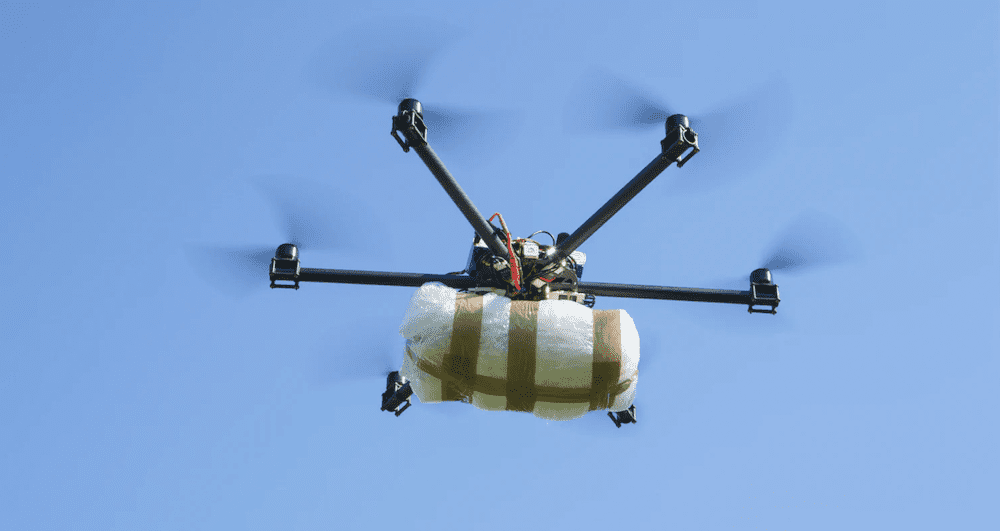 When a drone is hovering in place (in a no-wind condition), the thrust is equal to the weight of the drone:

So if the mass of the drone is 35 kg for example:

The drone’s propellers therefore need to produce 343 N or 35 kgf of thrust for the drone to hover. If we’re building a quadcopter with four propellers, that comes to 86 N or ~9 kg per propeller.

But it’s not that simple, because in most cases the drone will also need to take off and maneuver, which requires acceleration and greater lift.

There is a basic rule that says that for most drones, if your propellers can generate twice as much thrust as is required to hover, you’ll have sufficient control for most operations. So if you’re building a drone for surveillance, videography or basic flying, this is a pretty simple rule to follow.

For our 35 kg drone, each propeller would therefore need to produce about 18 kgf of thrust for stable control. 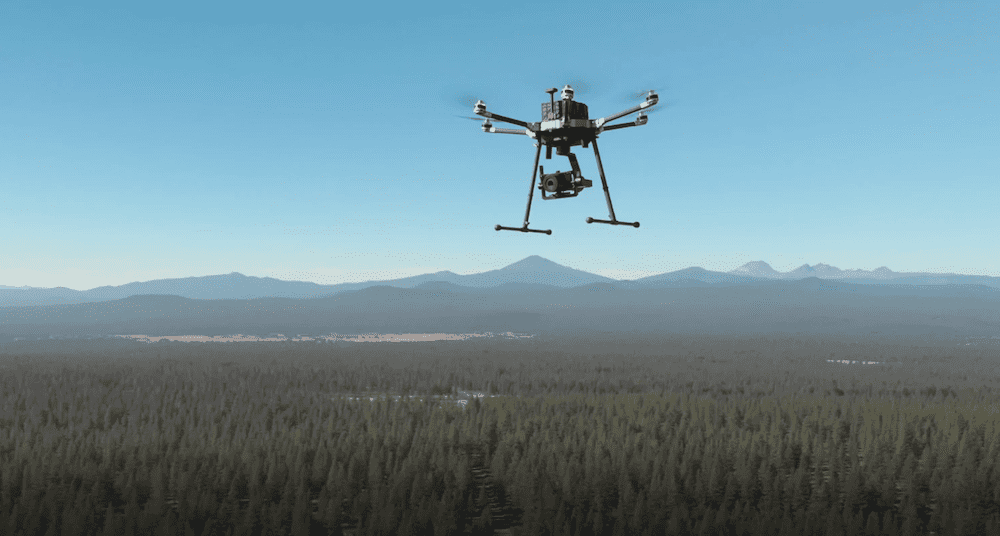 Let’s say that we want our drone to carry a payload in addition to its own weight. We just have to figure out how much extra mass we need to lift, then make sure that the propellers can produce enough thrust.

If we use the same formula as before:

Next we need to confirm that our UAV can produce 20 kgf of thrust per rotor, which we can do using several methods.

There are a few ways to find out if our propellers can produce enough thrust:

We will try all three methods to see what we come up with.

We host a free database of drone motor and propeller data. Data is contributed by users who have used our thrust stands to test their propellers.

To find out what size of propeller can produce 20 kgf of thrust, we will click on the “Test Data” heading and then “Add filters”. Next we click on “Data”, “Powertrain Data”, and choose “Thrust (kgf)” from the first drop down menu, followed by the “≥” in the next drop down menu, and finally we manually enter 20 in the last box. Finally, we can click “Apply Filters”. 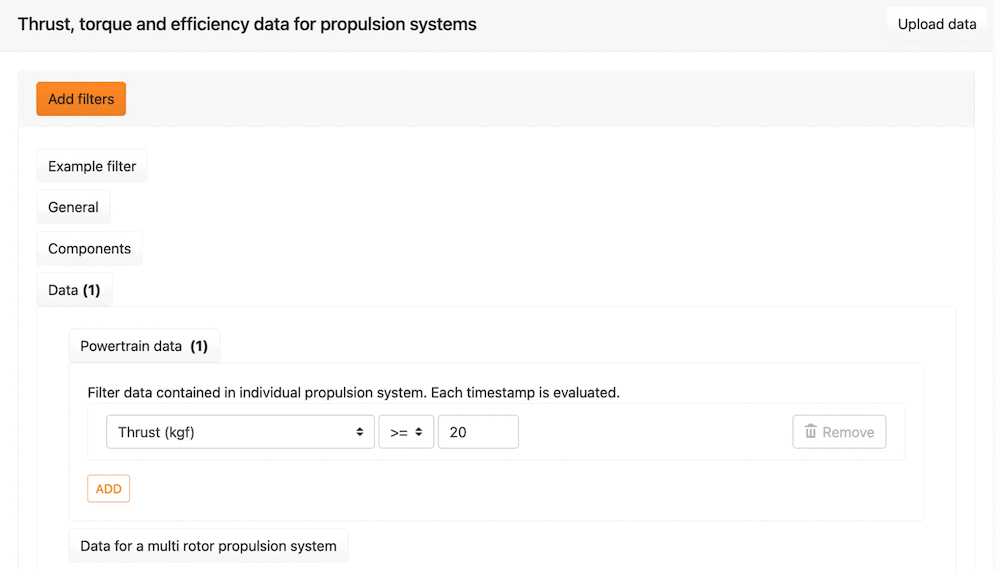 Figure 3: Filter settings to find propellers that can generate at least 20 kgf of thrust

These settings will show us all the tests performed with propellers that generated at least 20 kgf of force.

In the table that appears, we can first look at the “Propellers” column, which gives us a snapshot of the diameter and pitch of the propellers that fit our criteria. If we want to learn even more about them, we can click on each test to get more details and data.

For this 62” propeller for example, we can see that it produces over 20 kgf of thrust: 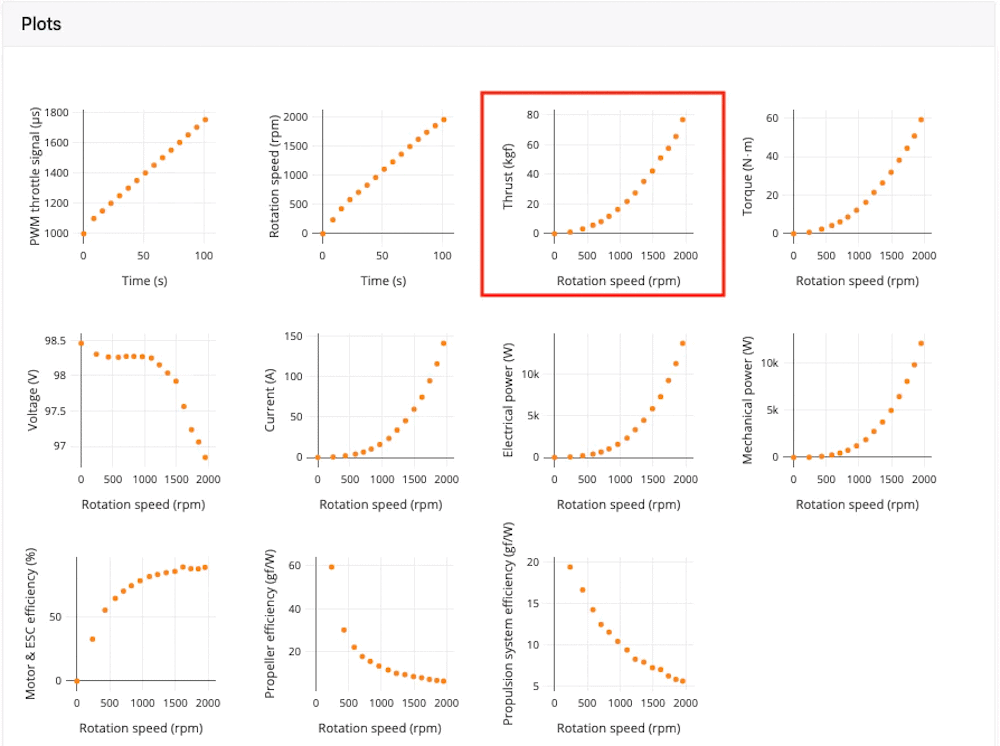 That said, it produces a lot more thrust than we need, meaning it’s probably larger than necessary.

We can look at other results to find a propeller that would give us enough thrust without giving too much. This 40” propeller with a pitch of 10 is a good example, as it produces thrust up to 20 kgf, but not much beyond that. This will ensure we’re not carrying more weight than we need to be.

Test the Propeller with a Thrust Stand

Once we’ve chosen a propeller we think will work, we can test it using a thrust stand to confirm that it produces the thrust we need. We can also measure its efficiency and compare it with other propellers to find the most efficient one.

A thrust stand such as the Series 1580 works great for smaller propellers up to 5 kgf, but for our purposes we need to measure up to 20 kgf per propeller, so the Flight Stand 50 will work best. 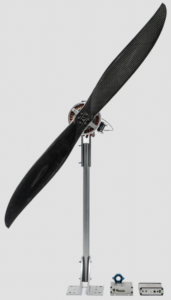 Based on the database results from the previous section, we’ve selected a 40” propeller that we think will meet our needs. We mount our motor and the 40” propeller on the Flight Stand 50, then run a manually controlled test using the Flight Stand Software. We gradually drag the throttle up to max, seeing if we reach our needed thrust of 20 kgf. 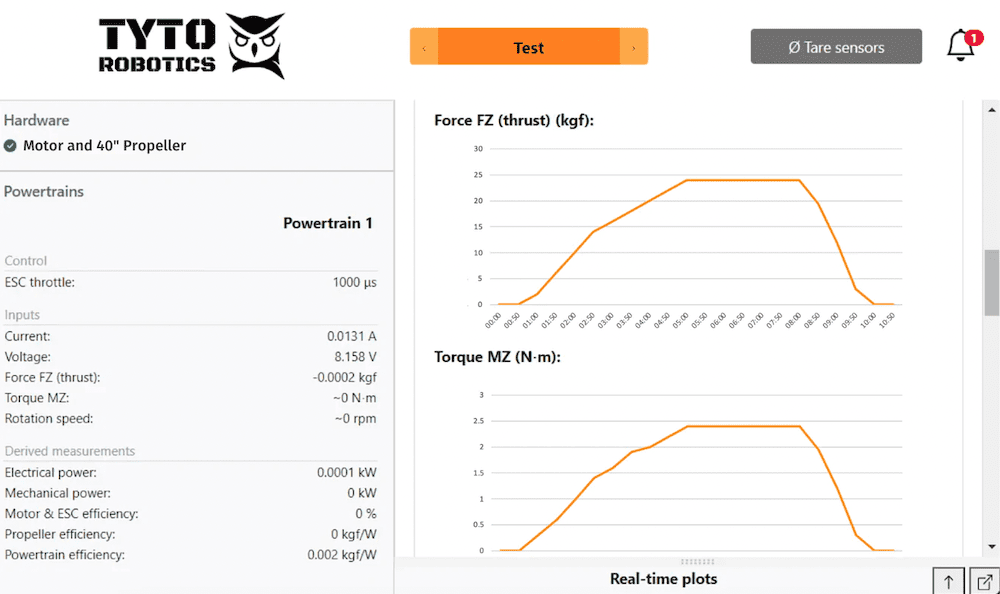 This test confirms that this propeller can provide us with the thrust we need. We can repeat the test using different propellers of similar diameter, pitch and material to see which one is most efficient in our operating range of 10 to 20 kgf.

Our friends at Mejzlik have created two propeller thrust calculators: one for static tests and one for dynamic tests. Both can be downloaded on their website.

If we enter our 40” propeller’s data in the static thrust input table, it provides us with estimates of performance, including thrust and efficiency:

The graphs tell us that our 40” propeller can operate at our hover and max thrusts, and as a bonus, it is quite efficient at our hover thrust where we will be spending much of our flight time.

In conclusion, the amount of weight a drone can carry depends on a few factors, but most importantly the amount of thrust generated by its propellers.

There are several ways to estimate whether your propellers can produce enough thrust, such as by using a database or thrust calculator, but the only way to be sure is with proper testing.