As more vessels with autonomous capabilities are put into service to execute real-world missions, questions about the different types of autonomous and unmanned systems naturally arise. In this article, Sea Machines discusses how they are different and when each should be used. 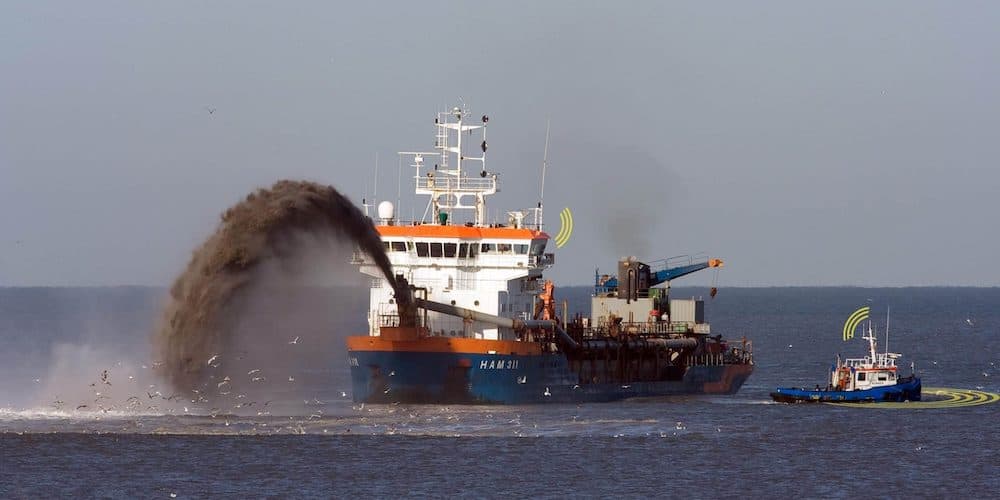 In less than a decade, our industry has seen a rise in the acceptance and use of various levels of autonomous systems, robotics, and Artificial Intelligence (AI) for safety, productivity, and fleet management. Though still new and in the early adoption phase, these technologies are already revolutionizing work on the water and are continually finding new practical applications at sea.

As more vessels with autonomous capabilities are put into service to execute real-world missions, questions about the different types of autonomous and unmanned systems naturally arise. One of the most frequently asked is the difference between a drone and an autonomous boat? How are they the same? How are they different? And, most importantly, when should each be used?

But First, The Basics

A common term used in the industry is Unmanned Surface Vessel (USV). USVs are vehicles that operate remotely, semi-autonomously, or autonomously on the water (vs. underwater) without a crew. This term can include small marine drones used for surveying and other specific tasks to larger, self-driving vessels. USVs offer reduced operational costs, longer missions, and reduced risk to human crews.

Where the confusion comes in is the fact that while drones are usually unmanned, most are not autonomous.

“An autonomous system gives a vessel the ability to make decisions and self-govern when it comes to depth avoidance, sea keeping, collision avoidance and navigation,” explained Sea Machines’ Captain Arthur Seaman. “This capability is made possible by AI and computer vision, which drones lack. AI is the underline technology that makes autonomous vessels ‘intelligent.’”

Intelligence is a Major Differentiator

Unlike human-controlled drones, today’s autonomous systems gather data about the operational domain. They then use that data to intelligently make decisions that also incorporate COLREGs and other regulations, environmental factors, traffic patterns and even experienced mariner feedback. Additionally, Sea Machines’ advanced autonomy system also uses computer vision to scan the environment to collect essential navigational data. To date, this computer vision technology has identified tens of millions of targets – one of the most extensive marine data sets in the industry – and then analyzes the operating domain, identifying even very small objects on the water.

“Sea Machines autonomy and perception systems can fill the gap with what traditional sensors and the human eye can’t see. This level of situational awareness is possible by the utilization of artificial intelligence and/or computer vision. With this rich understanding of the environment, autonomous vessels navigate with greater safety and ease,” Moran David, Chief Commercial Officer explains. In short, technologies like Sea Machines interface vessels to make independent decisions based on a higher number of robust data streams.

The latest iteration of Sea Machines’ technology, called JETsense, is an intelligent voyage control product released in partnership with HamiltonJet. JETsense offers “skipper assist,” or mariner-friendly autonomy with enhanced situational awareness through cameras, radar, AIS, GPS, and other data sources. This new technology utilizes AI and advanced autonomy to perceive the domain and maintain precise steering and speed control during a voyage and can actively re-route the vessel to avoid traffic and obstacles. It ultimately elevates the bridge crew from continuous controller to commander, passing off routine navigational duties to the system.

Supporting Crews, Not Replacing Them

“Our goal is to make operations safer for existing crews. We offer features that automatically improve the ride and comfort, and reduce the amount of work required aboard,” said Sea Machines’ Frank Relou, European business development manager.

This is because autonomous systems can be trained to independently manage predictable and tedious tasks, such as at-sea navigation or following repeating grid lines.

“Letting the machine do the repetitive work allows mariners to focus on high-cognitive tasks, such as reporting, maintenance, critical paperwork, and more. It just makes a lot of sense,” said Relou.

Autonomy additionally supports crews by empowering them to operate vessels from the safest and most productive location. This could be outside the wheelhouse, aboard a second vessel or at a shoreside command station.

“A drone is purely about remote control by a single human operator,” said Relou. “By contrast, autonomy allows an operator to command a fleet of intelligent boats simultaneously, and from nearly any location.”

“Drones are primarily remote-controlled versus being remotely monitored and commanded,” added Seaman. “Sea Machines autonomy gives crews the ability to do both.”

Drones are often smaller, lighter, and purpose-built for specific missions. In addition, due to their size, drones may be challenged to handle rough sea conditions. Conversely, autonomous systems offer broader applications and can be deployed on multi-purpose and larger vessels designed to handle rough seas better.

While drones are optimized for singular, specific missions, autonomy systems are meant to be adapted into everyday operations. As true agnostic autonomous systems become more readily available and adopted by vessel owners, new ways of operating are emerging. For example, crews can be removed from high-risk situations and operate at a safer location or complete tasks that are company-critical while the system handles piloting, every day.

Because of the need for more robust capabilities to support more than a single mission, autonomous systems are physically also much larger. Drones have a smaller size advantage since developers minimize variables of what the drones can do. The processing power of an autonomous system is significantly greater than that of a drone, offering higher levels of performance, resolution cameras and overall capability.

A Smarter Way to Work

Sea Machines’ technology can be used to support many levels of autonomy, from fully crewed operations to reduced-crew and unmanned missions – a hybrid solution drones can’t offer.

“We have a very versatile system that allows us to span all the different degrees of autonomy,” said Seaman. “Our autonomous technology enables operators to do far more than what a drone can do, with greater confidence.”

In summary, drones are a good option for operators who are looking to manage basic line-of-sight tasks using smaller, purpose-built platforms, on a 1:1 basis.

For operators looking to ramp up operational performance and reduce at-sea risk with their existing or new vessels across a variety of missions, then modern-day autonomy is the better choice.