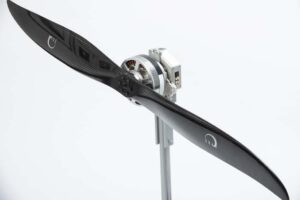 Test stand manufacturer RCbenchmark has confirmed that it has changed its name to Tyto Robotics, as part of a rebranding that reflects the company’s increased focus on the drone industry. Tyto Robotics has also released a new product line and entered the wind tunnel testing space.

‘Tyto’ refers to a genus of owls known for their efficient, silent flight. The company chose the bird as their namesake due to their tools allowing their clients to achieve these qualities. Robotics as a field integrates computer science and engineering, which are both areas of expertise for the company’s team.

The company originally offered small 5 kgf test stands for the RC (remote-controlled) community, and experienced continuous growth, adding larger products to their catalog including test stands measuring up to 75 kgf of thrust with propellers up to 70” in diameter. They have also recently added custom wind generators to their product line-up, thanks to a partnership with Swiss company WindShape, which provides an open-air alternative to traditional wind tunnel testing.

Tyto Robotics is also due to release a new line of test stands. The ‘Flight Stand’ series features a higher sampling rate and better calibration standard, and also allows for the testing of up to eight powertrains simultaneously. The company’s first generation of test stands and software will be renamed the ‘RCbenchmark’ series.

Tyto Robotics is actively seeking distributors in several regions, hoping to offer their new test equipment to markets with up and coming drone industries.

Charles Blouin, founder and CEO of Tyto Robotics, commented: “Our new company name reflects the profile of the customers we serve. The majority of our clients are commercial manufacturers and aerospace leaders such as Volocopter, Volansi, and Matternet.”

“We listened to our clients and we are pleased to offer tools which will allow them to take their testing to the next level.”