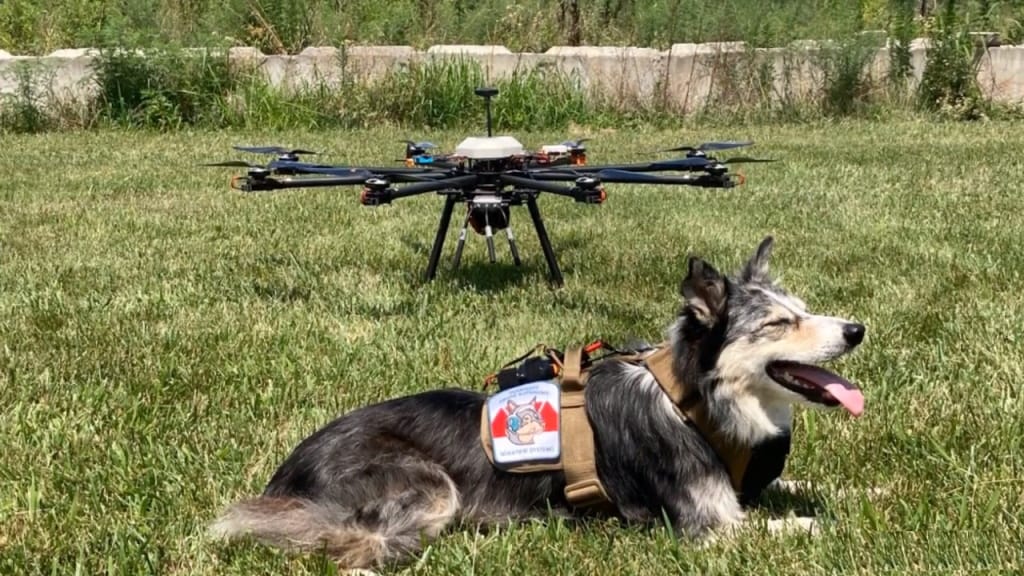 Scientific Systems Company, Inc. (SSCI) has conducted research for the Defense Advanced Research Projects Agency (DARPA) Information Innovation Office (I2O) on teaming autonomous unmanned aerial vehicles (UAVs) with search and rescue canines. The research culminated in a demonstration during which a UAV worked with a canine without intervention from a human handler to conduct a simulated search and rescue mission.

The demonstration used SSCI’s newly developed Teammate Aware Autonomy (TAA) system, Collaborative Mission Autonomy (CMA) and Finding Objects thru Closed Loop Understanding of the Scene (FOCUS) software. TAA develops predictive models of non-authoritative teammates such as canines that respond to only limited types of commands, enabling novel teams comprised of both autonomous and sentient agents to effectively and efficiently work together. This allows the advantages of autonomous systems such as drones to be combined with the unique strengths of sentient operators for which there is no technological substitute. In this case the UAV provides a birds-eye view of a landscape and artificial intelligence-powered object locating capabilities, which can be used guide the sentient canine teammate with an unmatched sense of smell.

SSCI worked with Missouri Task Force One (MO-TF1) – one of FEMA’s elite Urban Search and Rescue Teams – to demonstrate this new capability. While conventional Search and Rescue canines require a human handler to provide instructions to the canine, the TAA-enabled team used the UAV to command the canine directly, without need for intervention or direction from the canine’s handler. The drone was not being used as a mere direct relay of commands from the handler to the canine, but took safety-informed objectives from the handler and translated those into direct actionable commands, based on the scene the UAV observed.

The TAA system was successfully used to navigate the canine, command it to begin a search, and identify the canine’s alert behavior, cueing the FOCUS UAV to autonomously investigate the alert location. The canine was equipped with an electronic TAA vest, used to both broadcast audio commands to the canine from the UAV, and to provide the UAV with real-time data from the canine. The Search and Rescue canine’s handler played a supervisory role during the demonstration, ensuring the search and rescue mission was being conducted in an efficient and safe manner. This capability is not intended to replace the human handler, but could in the future allow a human handler to control a much larger pack of canines and UAV teams, ensuring improved and more responsive search and rescue results.

Erin McGruder, a Certified Canine Handler, member of Missouri Task Force One, and TAA’s Canine Search and Rescue Subject Matter Expert, commented: “I’m excited for the potential impact of this project. As a canine handler, my ultimate goal is to shape the abilities of a dog to help locate and save lives. This augmentation extends the abilities of the dog past my own limitations of speed and reduces the overall risk of responders.”