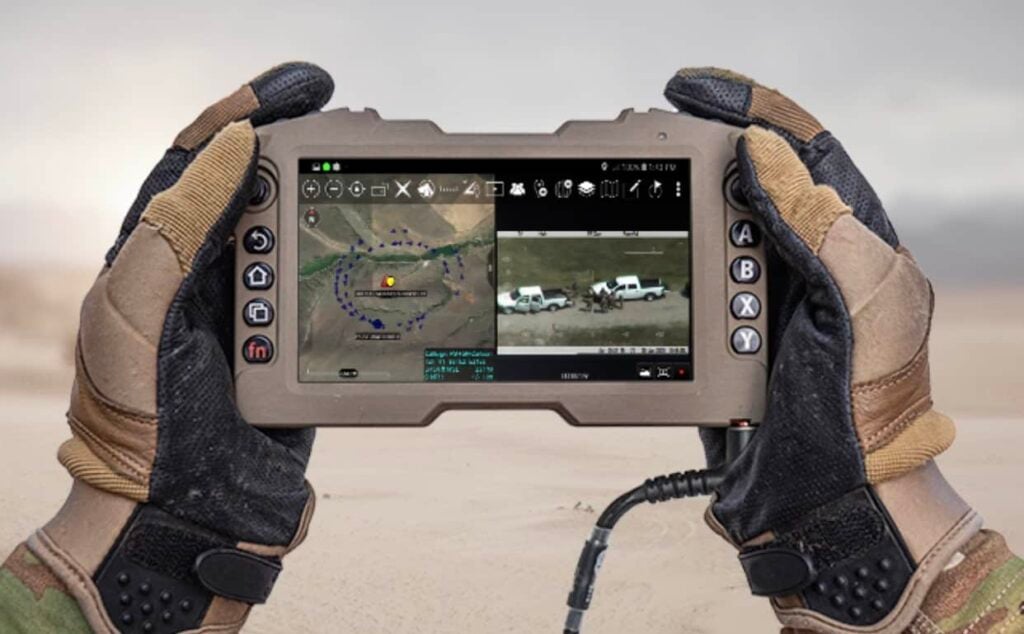 Persistent Systems has unveiled a Rugged Display and Controller (RDC) for the company’s MPU5 mobile ad hoc networking (MANET) smart radio. Featuring a 5.7-inch multi-touch screen, ruggedized case and physical buttons and joysticks, the RDC is designed for tactical operators as an alternative to consumer Android phones used with the MPU5.

When connected to the MPU5 MANET radio, the RDC allows operators to receive voice, video, and situational awareness data directly from every user, unmanned system, and sensor on the network. The system has been designed for glove-wearing tactical users, with physical buttons for ease and speed of use, including the Android standard Home, Back, and App Overview buttons. The RDC appears to the MPU5’s Android OS as a Gamepad Input Device, with two joysticks, rocker switches, A-B-X-Y buttons, and an emulated D-Pad. Using joysticks to zoom in and hotkeys to quickly switch between functions allows users to navigate their applications faster.

The RDC also incorporates eight integrated high-precision sensors (accelerometer, gyroscope, magnetometer, thermometer, pressure, light sensors, and rear-facing camera) that feed data into the Android Sensor Framework, allowing applications to be developed for the system that can utilise motion, orientation, and environmental data. A variety of applications have already been developed by Wave Relay Ecosystem partners and third parties, including software that controls UGVs (unmanned ground vehicles) and UAVs (unmanned aerial vehicles) as well as payloads such as EO/IR cameras.

Brian Soles, Persistent’s Vice President of Business Development, commented: “When you plug in the RDC, you instantly have a complete situational awareness capability. The MPU5 is a computer that runs the Android operating system, and every MPU5 comes preinstalled with the Tactical Assault Kit (TAK), which is a full-fledged situational awareness Android app.”

“We designed the RDC to match the chest-worn form factor that users were already accustomed to with commercial EUDs, while delivering increased ruggedness and capability. We contracted Juggernaut.Case to design the chest mount, to provide a unified experience to the end-user.”