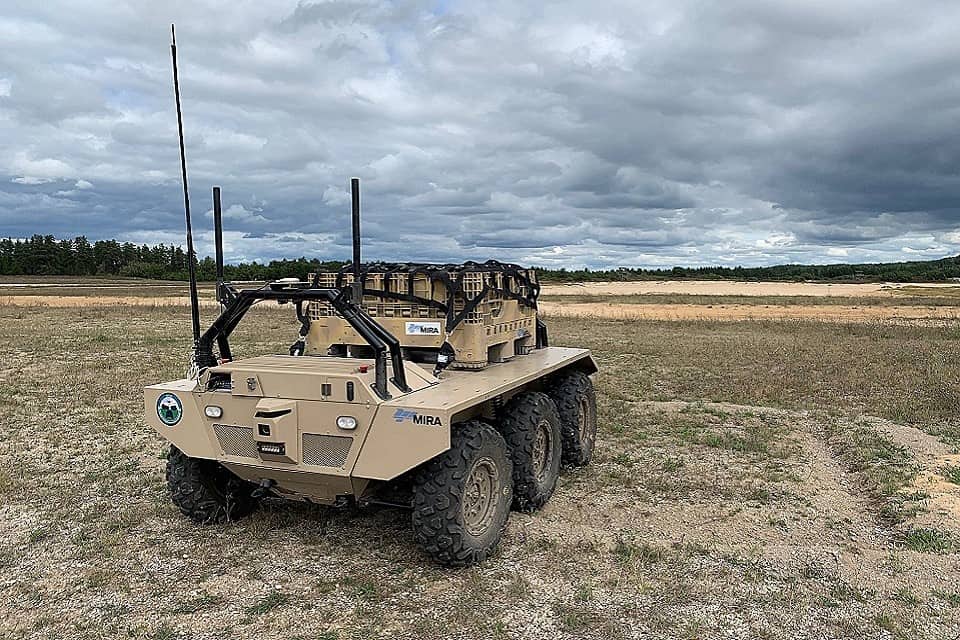 The United Kingdom’s Defence Science and Technology Laboratory (Dstl) has announced that it has awarded contracts to HORIBA MIRA and QinetiQ to produce unmanned ground vehicles (UGVs) and enabling autonomous systems as part of advancing Ministry of Defence (MOD) Transformation Fund commitments for the British Army.

Following Dstl’s recent “Last Mile” autonomous resupply challenge led by Dstl, a new initiative for the development and operational field experimentation of autonomous logistic resupply systems was announced by Secretary of State (SofS) for Defence, known as Project Theseus. These new contracts will help increase the MOD’s understanding of the capabilities and limitations of these systems in areas such as mobility, vulnerabilities and safety. The Army will then take the project to the next stage, and a further significant competition for Project Theseus is due to be launched by DE&S later this year.

HORIBA MIRA will supply three all-terrain VIKING 6×6 UGVs, which are capable of carrying up to 750kg of supplies to frontline troops using advanced AI-based autonomy with GPS-denied navigation. These will be followed by two TITAN UGVs, which are tracked systems based around a modular mission system software architecture. The experimentation and testing of these UGVs will inform further understanding of the capabilities that these autonomous systems can provide and implications for their integration with the wider defence logistics system.

The vehicles will be used by Dstl to conduct scientific and user trials in collaboration with the Combat Service Support Training and Development Unit (CSS TDU) and other British Army units. The work will seek to increase understanding of system potential and limitations to reduce the risks specific to acquisition of the Joint Tactical Autonomous Resupply and Replenishment (JTARR) capability, but will also develop deeper knowledge for the Army’s future employment of more advanced autonomous system capabilities.

Peter Stockel, Dstl’s Autonomy Lead, commented: “These contracts are a demonstration of the continued commitment to progressing autonomous systems as innovative approaches for developing future Land force logistic capability. Under the Autonomous Last Mile Challenge, we have conducted a number of in-depth trials both in the UK and with our partners in the US. These UGV systems will be used to undertake a series of technical evaluations and user utility assessments with the British Army and other users to rapidly advance MOD’s understanding under the ‘Prototype Warfare’ agenda.”

Brigadier Darrell Amison, Head of Capability for Combat Service Support, said: “Robotic and Autonomous Systems will provide commanders with more options to support a Land force operating at greater reach, dispersal and higher tempo. We look forward to ongoing collaboration with Dstl, wider Defence, and our strategic and commercial partners as we drive forward this ground-breaking and exciting project.”

Robert Mohacsi, Senior Commercial Manager for Defence Systems at HORIBA MIRA, commented: “Autonomous systems present the British Army with game changing capabilities, redefining how we will conduct future operations. Building on more than a decade of experience in deploying autonomous technology into military applications, HORIBA MIRA has applied an agile and fast track approach that will enable the army to field this equipment and meet its critical objectives. We are immensely proud that VIKING, with its market leading capability, has been selected to support this critical programme.”

Mike Sewart, Director for Research Experimentation and Innovation for QinetiQ, stated upon award of the contract: “Working to the principles of “Prototype Warfare”, as adopted by the British Army, the Joint Tactical Autonomous Resupply and Replenishment (JTARR) risk-reduction contract is a prime example of how QinetiQ is taking an agile approach to delivering solutions into the hands of the military for evaluation whilst continuing spiralled capability development.”