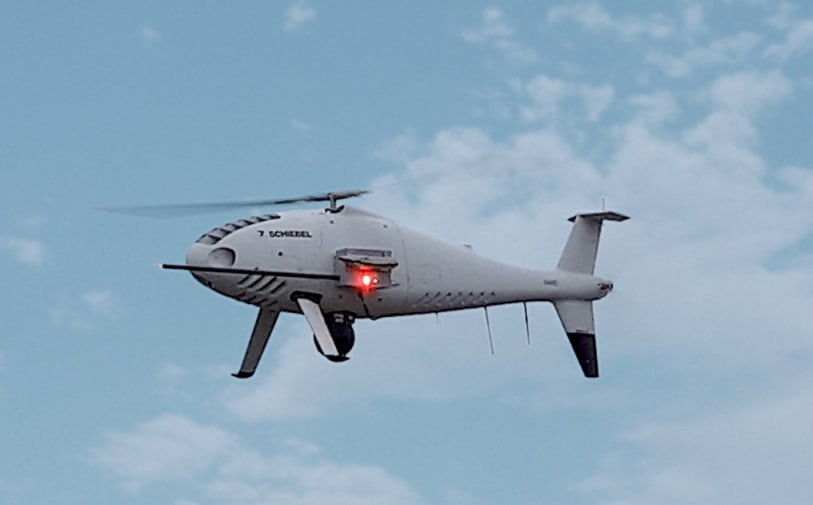 Schiebel has announced that, in conjunction with its partner Nordic Unmanned, it has successfully completed a two-day demonstration of its sulphur emissions detection technology with the company’s CAMCOPTER S-100 UAS (unmanned aerial system). The tests were conducted in the shipping lane outside Gniben, Denmark.

According to new regulations laid out by the International Maritime Organisation (IMO), the sulphur oxide content of exhaust fumes emitted by ships operating in Europe’s busiest sea routes must not exceed 0.1 percent. The CAMCOPTER S-100 UAS is being tested as a solution to enforce these regulations. The unmanned aircraft, equipped with a sulphur sniffer as well as an L3 Harris Wescam MX-10 real-time Electro-Optical/Infra-Red (EO/IR) camera, flies through the ship’s exhaust plume to measure the sulphur emissions. It can then use its onboard Automatic Identification System (AIS) to identify the ships.

During the trial, two successful flight were performed, lasting a total of around four hours and delivering compliant measurements of sulphur emissions. The certified sniffer provided live readings of the sulphur level in the ship’s exhaust plume.

Knut Roar Wiig, CEO at Nordic Unmanned, commented: “Due to the extensive operational experience in the maritime area as well as its endurance and ease of deployment, the CAMCOPTER S-100 is the ideal aircraft to sniff out the polluters. The measurement test scored 10 out of 10 points and we demonstrated our capability as an operator and ability to quickly get the required authorisations to deploy and fly the service. We really look forward to helping maritime authorities in Europe and other parts of the world to enforce the IMO 2020 regulation by deploying our crew and the CAMCOPTER S-100 to conduct sulphur emission monitoring. If a ship is not following the regulations, we will definitely sniff it out.”