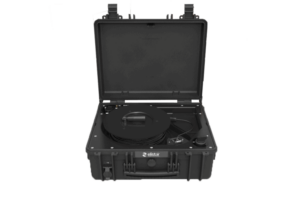 Elistair has announced that its tethered drone system has been deployed by CNN in conjunction with UAS operator Vector Solutions to support the first U.S. Democratic debate of the year, held on Drake University campus in Des Moines, Iowa. The system was used to provide persistent aerial video transmission of the area for a total of 13 hours over two days.

CNN Air flew a DJI M210 drone attached to Elistair’s Ligh-T tethered station at a height of 60 metres, operating for 8 hours on the first day and 5 hours the second day. Aerial imagery was fed to the ground control station before being transmitted live via a 4G link to the production team. The flexibility of the tethered drone system allowed easy relocation for transmitting each event of interest for live broadcast.

Elistair’s Ligh-T tethered station is ideal for broadcast applications thanks to the unlimited flight time it provides to UAVs, and its compatibility with a wide range of multirotor drones currently on the market. Users can broadcast a continuous stream of aerial images to viewers without the need to land to change the batteries. The UAV’s flight zone is also totally secure as it is physically connected to the ground, allowing highly flexible deployments in difficult environments, particularly in urban areas with a high density of infrastructure and population.

Howe Hildebrand, a pilot with Vector Solutions, commented: “This solution provides excellent results for any venue that requires constant, uninterrupted overwatch. It allows for constant, coverage of the subject area. There’s no need to continually land and change batteries, therefore you never lose contact with the subject area.”

Every four years, the Presidential Candidate debates attract tens of millions of viewers, and are the most watched television program in the United States after the Super Bowl. The live broadcast of the first debate of this year attracted 7.3 million viewers.