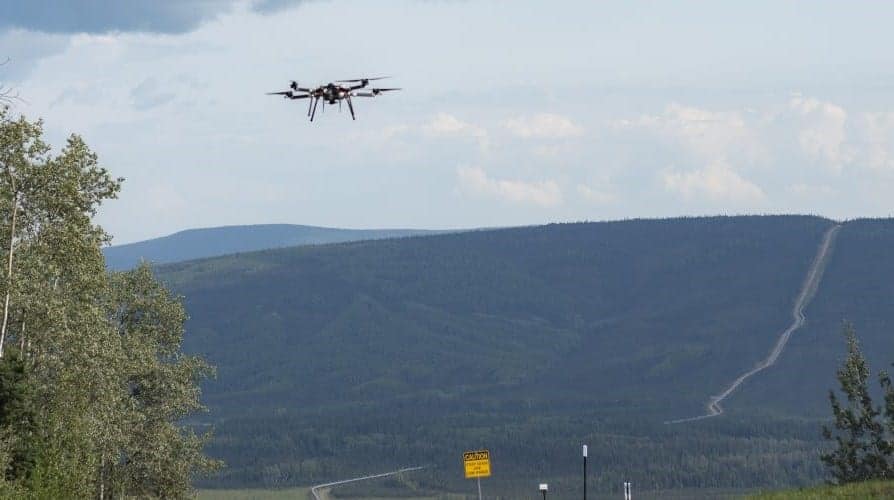 Echodyne has announced that its EchoGuard airspace management radars were the ground-based sensor for the first-ever UAS (unmanned aerial system) mission to operate beyond-visual-line-of-sight (BVLOS) flight without ground observers. The ground-based electronically scanning array (ESA) radar sensors worked in coordination with Iris Automation’s onboard detect-and-avoid system. The demonstration of a nearly four-mile linear inspection mission along the Trans-Alaska pipeline was designed and conducted by The University of Alaska’s Unmanned Aircraft Systems Integration Pilot Program (UASIPP) and the Alyeska Pipeline Service Company and is a true first for the UAS industry. All other BVLOS missions have required ground observers, which is too logistically complex and costly for business applications.

“Alaska Fairbanks’ team has shown the future of UAS missions for industrial and commercial companies,” said Eben Frankenberg, Echodyne CEO. “There are many applications that require operation beyond the operator’s sight. This practical demonstration of detect-and-avoid technologies for a real-world inspection application helps aviation authorities define the sensors and tools necessary to ensure UAS safety for dozens of industries and applications.”

The U.S. Department of Transportation’s UASIPP is conducted in multiple locations across the US, and Echodyne’s sensor technology is a key part of these programs. The program encourages government authorities at all levels to cooperate with drone operators and sensor technology manufacturers to accelerate the safe adoption of drones into the nation’s airspace. The UAF team proposed several ways to pioneer safe drone use in Alaska — to deliver medical devices to remote areas, help searches and rescues, survey fish and wildlife, and monitor pipelines, roads and other infrastructure.

Operating in coordination with ground-based systems, like Echodyne radar, the Casia system from Iris Automation directs the UAS to avoid airspace collisions and assures mission safety. “The mission parameters defined by UAF really push the industry to increase sensor technology’s effectiveness,” said Iris Automation CEO and Co-founder Alexander Harmsen. “Our Casia system performed well and demonstrated that leveraging onboard detect and avoid systems is critical to mission safety and produces the results businesses are seeking.”