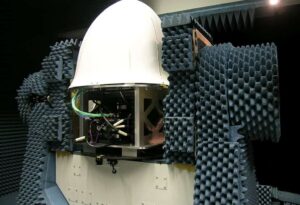 HENSOLDT has announced that it has enhanced an important feature of its collision avoidance radar system for UAVs (unmanned aerial vehicles). Following extensive laboratory tests and measurements, HENSOLDT has developed a special radome technology which protects the radar from environmental factors such as bird strikes or lightning, while minimally affecting the radar’s functionality. The architecture of the new radome was initially tailored to a particular test aircraft but can be adapted to other platforms. Further flight tests are scheduled to take place shortly.

HENSOLDT has developed a demonstrator of the detect-and-avoid radar system, which uses the latest radar technology to detect objects in the flight path of a UAV and to give early warning of any threat of collision following precise evaluation of the flight direction. At the same time, the sensor also assumes all the functions of a weather radar system. The multifunction radar for UAVs will be presented for the first time to the general public in Ulm, during the International Radar Symposium of the German Institute for Navigation (DGON).

The UAV radar system uses state-of-the-art AESA technology (Active Electronically Scanned Array), which allows several detection tasks to be carried out at the same time and enables objects to be detected extremely fast. It replaces the pilot’s visual assessment of the situation. Thanks to its excellent detection capabilities, the multifunction radar is equally suitable for military and civilian UAVs, e.g. for the delivery of cargo.

This radar system, which is incorporated into the UAV’s nose, needs to be protected by a radome that is electrically transparent, has exactly the same thickness across the board and is adapted to the aerodynamics of the platform. This requires special knowledge of materials processing and the operating principle of radar systems.

HENSOLDT operates one of Europe’s largest cleanroom production facilities at its Ulm site in order to produce the radio-frequency components required for AESA equipment. The company’s radar systems and radar components are used on board aircraft, satellites, ships and in ground stations.