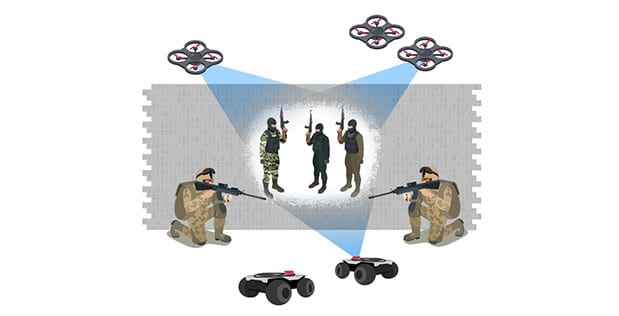 For the first topic area, proposers will seek to develop and implement synthetic capabilities in simulation, representing potential future technologies, such as distributed “see-through-wall” sensors, passive swarm communications, or enhanced sensor/computing arrays, to enable and demonstrate novel swarm tactics. Proposed technologies could be near-term advances that are being prototyped in laboratories or far-term ideas that are primarily conceptual but physically grounded.

DARPA also has awarded separate contracts for the third swarm sprint to Carnegie Mellon University and Soar Technology Inc., each of which will focus on development of advanced swarm tactics.

The third swarm sprint aims to augment the growing collection of swarm tactics in the OFFSET ecosystem, employing heterogeneous swarms of air and ground robots, and also to explore innovative technologies to enhance human-swarm teaming or how humans interact with autonomous swarms.