US Navy Fire Scout UAS to be Redesigned 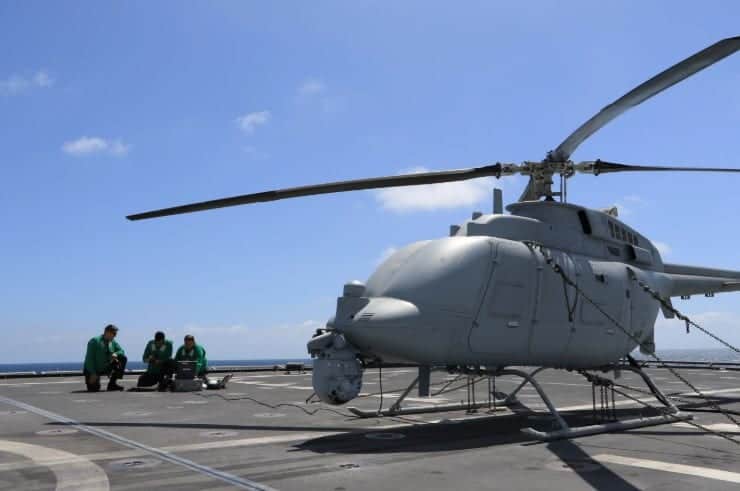 The U.S. Navy has announced that it is rethinking how it will employ its emerging MQ-8C Fire Scout rotary-wing unmanned aerial vehicles (UAVs) to help Littoral Combat Ships (LCS) take on tougher targets.

The Navy has recently shifted the focus of the Fire Scout away from missions that would protect a Littoral Combat Ship from a swarm attack of fast attack craft/fast inshore attack craft (FAC/FIAC). Instead, the UAV would use new sensors to provide targeting information to weapons aboard an LCS, Cmdr. Edward Johnson, the Navy’s Fire Scout requirements officer, said during a panel at the WEST 2019 conference. The move comes as the Navy has included more offensive weaponry aboard LCS with the goal of making it a more lethal surface combatant.

Previous plans called for the Fire Scouts to be armed with 70mm Hydra rockets equipped with the Advanced Precision Kill Weapon System (APKWS) guidance system to take on threats like the Iranian Revolutionary Guard Corps Navy fast attack craft in the Persian Gulf.

“We shifted it away from the new kind of 5th Fleet centric mentality and shifted more to a peer competitor challenge – and for Fire Scout, what that meant was a shift away from that armed unmanned system to a more sensor-laden targeting platform,” Johnson said. “What’s important to us right now is making sure we have the right sensors, a good multi-function radar, some kind of passive targeting capability and the right networks to push that information to the right people at the right times. So, no immediate plans for weaponization, but it is on our capability road map just for a little bit further down the road.”

The idea would be that the Fire Scout, specifically the larger “C” model based on the Bell 407 airframe, would be able to greatly extend the range of the sensors of an LCS to find and target threats.

“Charlie is going to be a fantastic addition to the fleet, especially when you couple it with the future long-range weapons that are being procured for LCS. We’re really the only capability to target for those weapons beyond the horizon of shipboard sensors,” Johnson said. “We’ve got some challenges ahead of us, but I think that it’s a worthy endeavor. And we will learn a lot, and the Navy will learn a lot, and I think we’ll be a better fleet for it here in the next few years.”

For now, that targeting information would feed into the emerging Naval Strike Missile that will be fielded as an emerging anti-surface capability on the LCS. But a Fire Scout with the ability to find and share targeting data could see use in additional platforms. Naval Air Systems Command has said the aircraft will also be compatible with the systems aboard the next-generation frigate (FFG(X)) currently under development.

“We’re working through that now. Naval Strike Missile, and the [Chief of Naval Operations’] charge to get that out and deployed as quickly as possible has invigorated this effort – and both programmatically and I guess from a [concept of operations] development standpoint,” Johnson said. “I think frankly it’s an exciting time to be dealing with unmanned systems in this targeting realm.”

Johnson was not specific about the future systems planned for the MQ-8C but in 2017 Fire Scout builder Northrop Grumman said the company was looking at integrating the Leonardo Osprey 30 active electronically scanned array (AESA) and a Link 16 datalink for the C variant.

“The Fire Scout is on the ship. The captain has control of the ship and the Fire Scout. Now he has his own asset to generate that over-the-horizon targeting information. That’s a circle of influence and sea control out to about 300 miles,” Scott Kennedy, then-Northrop Grumman director of business development for tactical autonomous systems, told USNI News at the time.

The C-variant is currently being tested after completing an Initial Operational Test and Evaluation (IOT&E) event.