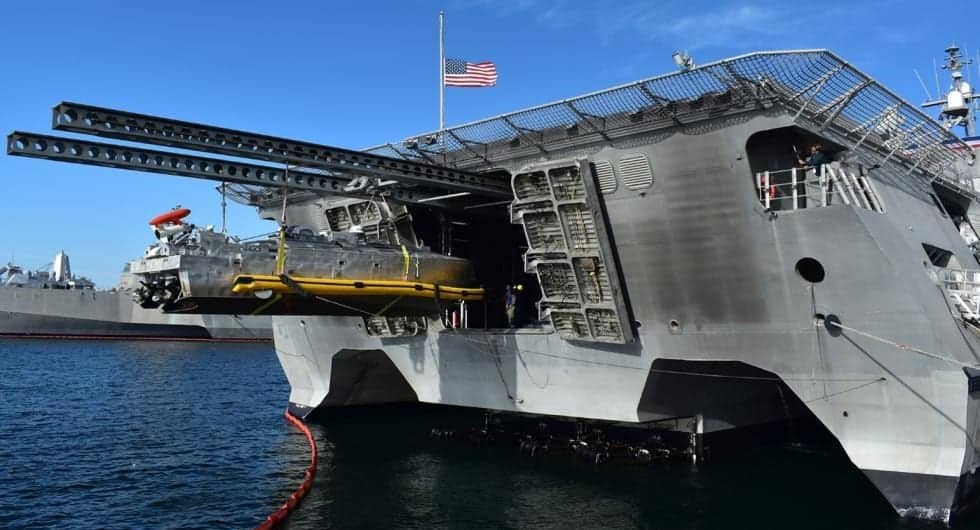 During the integration events, the Knifefish UUV and UISS both successfully verified the communications link between Independence and the unmanned systems. Additionally, several launch and recovery evolutions from the ship were also executed.

NAVSEA notes that these test events mark an important milestone for the LCS Mission Module Program, as it has now successfully tested each vehicle in the MCM MP — an MH-60S helicopter, the MQ-8B Fire Scout UAS (unmanned aerial system), UISS and the Knifefish UUV — on board an Independence-variant LCS.

In addition to completing integration tests of UISS and the Knifefish UUV, the program has also certified all the aviation modules for the MCM MP for deployment on Independence-variant ships.

“These airborne MCM systems provide combatant commanders the ability to rapidly deploy systems that can detect near-surface mines as well as neutralizes mines in the water and on the bottom without requiring Sailors to sail into the minefield,” NAVSEA says.

NAVSEA notes that the Coastal Battlefield Reconnaissance and Analysis system, which is a vertical-take-off UAS payload, provides a “much-needed” beach zone mine-detection capability in support of the amphibious assault mission.

“These tests are a subset of a comprehensive test program that encompasses shore-based system testing to characterize individual systems prior to completing final integration on an LCS,” NAVSEA says.

“The LCS Mission Module program office will continue to incrementally deliver MCM MP systems to the fleet in advance of the formal MCM MP initial operational test and evaluation events beginning in 2021.”