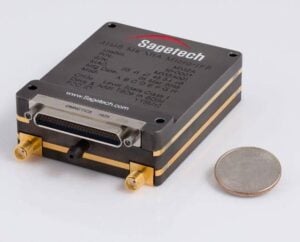 Sagetech Corporation, a developer of certified UAV (unmanned aerial vehicle) avionics, has announced that it has demonstrated NATO Mode 5 encrypted interrogations/replies with a device weighing less than 6 ounces. The MX12B is an aviation transponder that enables small unmanned aircraft to interoperate in NATO military airspace, at minimal weight-cost. The demonstration was hosted at a government facility near Patuxent River Naval Air Station by the “IMPAX” section of the Navy’s unmanned aircraft program office (PEO U&W), which is tasked with rapid acquisition of miniature Mode 5 technology for small U.S. military drones.

Mode 5 is an air-combat identification system which positively distinguishes friendly from enemy aircraft, reducing fratricide. The technology employs spread-spectrum radio transmissions that are difficult for adversaries to intercept or jam and encrypts data with keys that change every few seconds.

Congressional mandate requires U.S. armed services to upgrade their aircraft with NATO Mode 5 technology, but small unmanned aircraft struggle to carry heavy legacy transponders that weigh as much as 10 lbs. The Navy has long sought a lightweight Mode 5 transponder for use in its small drones, some that weigh only 40 lbs at takeoff. Sagetech’s MX12B transponder weighs 5.3 ounces, provides full specification performance, and includes the latest FAA-certified civil modes for compliant flight in both military and civil airspace.