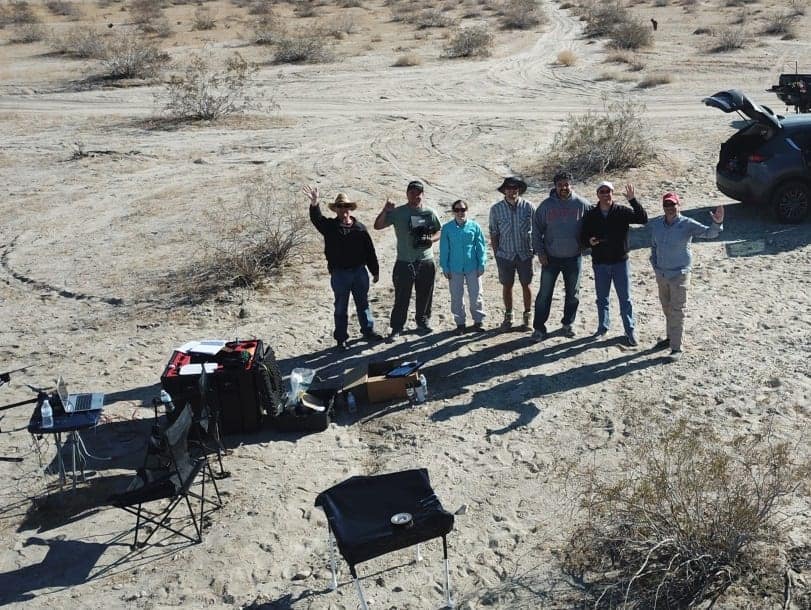 The research is focusing on evaluating both past large slip events (earthquakes) and aseismic creep (also known as “silent earthquakes”), which are tremors that release their energy over weeks or months rather than seconds. It is looking to discover new fault zones and active fault traces, which are visible marks where a geological fault meets the ground surface. The research is also looking to detect fault slip that has resulted from past earthquakes. Mapping fault zones and land surface changes that resulted from previous earthquakes can deepen the understanding of hazards posed by the fault, including the possibility of future temblors.

“LiDAR mapping represents a very exciting technology for geology since it enables the generation of accurate 3D mapping, even in the vertical component where classical photogrammetry techniques are lacking,” said Dr. Allen Gontz, Professor and Chair of Geological Sciences at San Diego State Univ. “Our researchers at SDSU are planning to continuously monitor the fault to better characterize it and exploit the advantages of the current 3D mapping technique.”

“Being deeply rooted in the LiDAR mobile mapping market, Geodetics is always on the lookout for the best-of-breed sensors for use in our products,” said Dr. Lydia Bock, President and CEO, Geodetics Inc. “We have been working with Velodyne as our LiDAR provider for several years. Velodyne continues to enable Geodetics to meet its goal of offering state-of-the-art systems that are easy to use and offer excellent cost/performance value to our customers.”

“Industry leaders rely on accurate, dependable data created by Velodyne LiDAR technology to provide the highest performing mapping systems in a compact solution,” said Mike Jellen, President and CCO, Velodyne LiDAR. “Geodetics designs and builds advanced mapping systems that make them a go-to provider for precision navigation and sensor integration for mobile applications in the air, on land and sea.”

In their study, SDSU researchers are developing a comparison between several techniques for evaluating past slip events and looking to establish precision and accuracy of the techniques relative to each other.

Previous work in this area has utilized traditional photogrammetry techniques using small drones to build digital terrain models of earthquake faults. The Structure from Motion (SfM) approach in photogrammetry to monitor topography changes has been a hot topic in geology for the past two years. However, SfM does not have inherent referencing scale – the scale at which symbols and labels appear on a map at their intended, true size. Other techniques involve LiDAR with the U.S. Geological Service using airborne LiDAR while other researchers have tapped ground-based LiDAR to map topographic expression of the fault and examine offsets, which are the distance the fault is out of line with the map.

The SDSU team used a Geodetics Geo-MMS system including the mapping payload and DJI Matrice M600 Pro drone for its San Andreas Fault mapping. The Geo-MMS payload was equipped with Geodetics’ Point&Pixel technology which enabled researchers to generate 3D models without the use of ground control points (GCP), which are marked points on the ground that have known geographic locations.