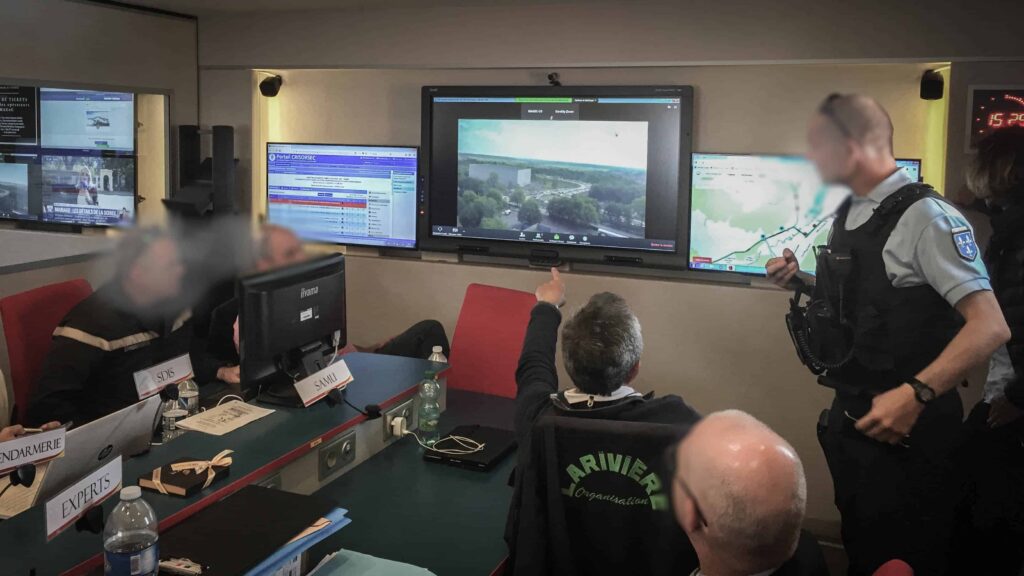 Elistair has announced that its Orion tethered drone has been recently deployed in conjunction with Delta Drone to provide surveillance for the La Ferté Alais air show. This deployment was in support of the firefighting unit SDIS 91 and the Gendarmerie in order to assist in providing security for the 40,000 visitors.

The ISS (Intelligent Security Systems) division of Delta Drone, a firm specializing in the integration of civilian drone services for professional use, successfully deployed the tethered Orion system to provide enhanced security and surveillance of this popular and busy event. Fully automated, enduring and with a state of the art optical surveillance camera, Orion easily integrated into the existing security and crisis management system of the event.

Designed for extended flight time of more than 10 hours and able to cover large and difficult-to-reach areas, the tethered drone system Orion provided live and relevant situational awareness for commanders in the Gendarmerie and SDIS 91 fire service. There were two key areas which needed an enduring aerial view:

Positioned within a restricted access area at the centre of the event and equipped with a stabilized day/night camera with X30 optical zoom, Orion was able to provide surveillance of several square kilometres. The drone transmitted live images of the event via a local 4G network to the emergency management control room. The deployment of Orion provided a force multiplying capability to the emergency services tasked with providing security of the event. During the mission Orion detected a fire close to the runway; because of the available access to live imagery from the scene firefighters were able to quickly tackle the fire before it spread further.

Throughout the two-day event, the Orion drone was critically involved in assisting the security services at the aerodrome. By performing continuous surveillance of the area, Orion contributed to more efficient and safe parking management and to a minimized risk to spectators and the aircraft involved in the event. Using a tethered drone mitigated the risk to aircraft and the public and allowed the Orion to be airborne on an active airfield whilst flying displays were being carried out.

Pascal Auberty, Director of Larivière Organization and the air show organiser summarised the use of the Orion system by stating: “What a joy to be able to work with an instant and easily controlled view. Together with the Magec (operational command post of the Civil Security), we were able for the first time to prove the effectiveness of using a mix of public emergency services and private, commercial equipment to provide security for this type of event. In addition to the reassurance provided by the instant situational awareness of being able to see where vehicles and spectators are, it is a critical asset to manage effectively this type of large gathering.”

Christian Viguié, CEO of Delta Drone, said: “This operation demonstrates the expertise of the technologies developed by Delta Drone, and confirms the relevance of the Group’s strategy, which has positioned itself very strongly in the high-potential surveillance and security sector. It also highlights the relevance of our investment in Elistair and the synergies between our two companies.”

Elistair’s CEO, Guilhem de Marliave concluded by saying: “With remarkable savings in cost, time and efficiency, Elistair’s tethered systems represent an extremely productive and effective solution for secure management of large events. We are proud of the help our technology has provided to law enforcement and civil security personnel, not just in France but in 40 other countries.”