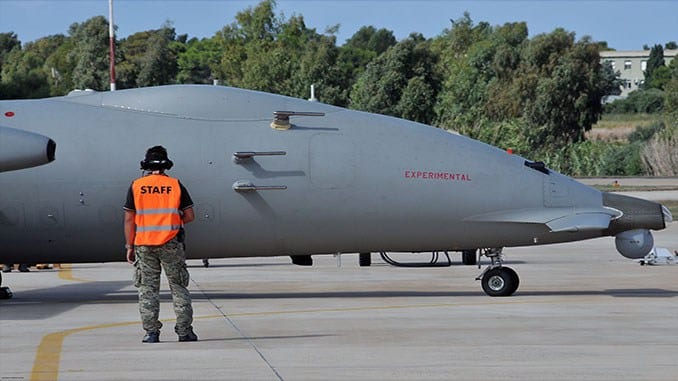 Piaggio Aerospace has announced the successful completion of the first flight test program for its remotely piloted P.1HH HammerHead unmanned aerial vehicle (UAV). The aim of the test program was to experiment with satellite control of the MALE (Medium Altitude Long Endurance) system.

The flight test program was performed in partnership with Telespazio, a joint venture between Leonardo and Thales, which provided the satellite technology. The purpose of the program was to integrate the technologies that allow flying beyond the line of sight (BRLOS, Beyond Radio Line Of Sight) and to assess their performance.

The experimental campaign was carried out at Birgi Airport in Trapani by a team of experts from Piaggio Aerospace and Telespazio, who verified on the ground the efficiency of the satellite technology in several areas of application. Tests were performed by using the satellite Athena-Fidus, which is managed by the Fucino Space Centre of Telespazio. The satellite allowed the test team to communicate to the P.1HH the necessary information for the command and control of the aircraft, and also to transmit from the aircraft to the ground the on-board sensor data acquired during the flight, fully simulating surveillance missions in the BRLOS mode.

Fabio Guida, Chief Technology Officer of Piaggio Aerospace, commented: “Our aircraft guaranteed the success of a key test at European level for the future development of the defense and security sector, that will increasingly rely upon remotely piloted systems of this class. The outstanding outcome is evidence of Piaggio Aerospace’s commitment to the continuous development of the P.1HH HammerHead program, which will see the first deliveries this year. The platform represents the only European MALE product and is an uncontested excellence within the industry.”