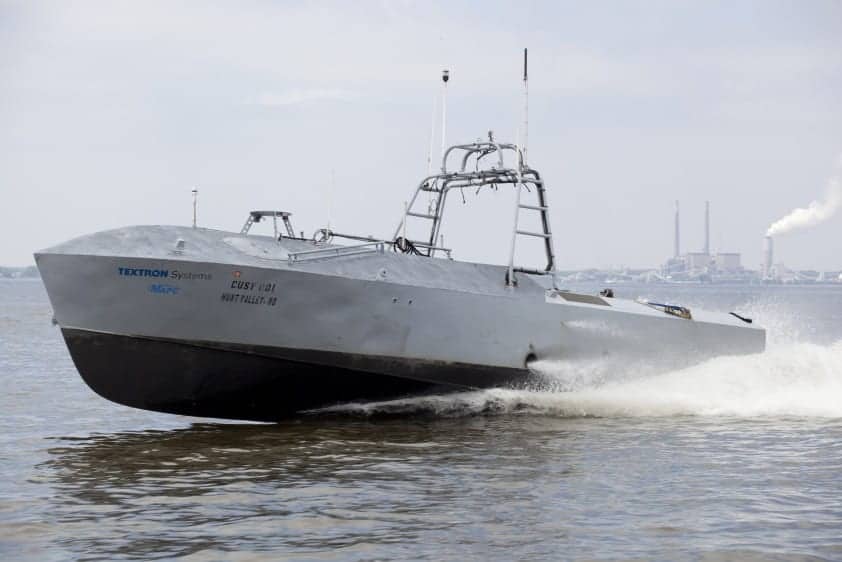 “The Navy is excited to continue to work with its industry partner, Textron Systems Unmanned Systems, to continue to develop, test and deliver additional capability to the fleet with the MCM USV platform and systems,” Captain Jon Rucker, Program Manager for the Navy’s Unmanned Maritime Systems Program Office (PMS 406) said. “The craft and its associated systems will provide a modular capability that will be a key component of the Navy’s future mine countermeasures efforts.”

These two additional CUSVs will join the U.S. Navy’s first CUSV, which is designed for the influence sweeping mission. This UISS CUSV recently completed initial testing near Textron Systems Marine & Land Systems facility in Louisiana and is currently undergoing additional testing off of the east coast of the U.S.

“We are pleased to see the U.S. Navy’s request for two additional vessels to support their mine countermeasure mission and are excited to be a part of the growing adoption of unmanned technologies in support of the U.S. Navy’s mission to safely secure our waters,” says Vice President of Control & Surface Systems Wayne Prender, “The inherent modularity that CUSV provides will enable the U.S. Navy to complete both mine-sweeping and mine-hunting missions from a single craft, demonstrating the CUSV system’s multi-mission capabilities and large, configurable payload bay.”

The CUSV is a multi-mission unmanned surface vehicle, capable of carrying multiple payloads, including side-scan sonar, mine neutralization, nonlethal weapons, and intelligence, surveillance and reconnaissance (ISR) sensors. Since its first demonstration in 2009, the CUSV has successfully completed several prominent exercises with the U.S. Navy. Today, the variations of the CUSV have amassed more than 2,000 on-water operational hours. The Textron Systems CUSV team includes its Marine & Land Systems business to leverage its 48 years of naval experience and proven ship-building capability, alongside the company’s unmanned systems expertise.