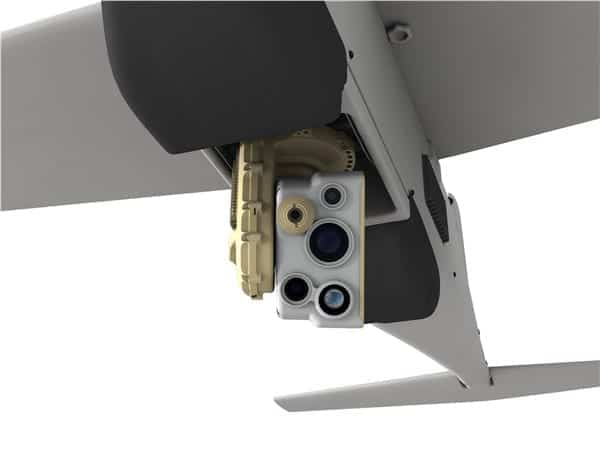 AeroVironment, Inc., a developer of small unmanned aircraft systems (UAS), has unveiled its new Mantis i45 electro-optical/infrared (EO/IR) gimbal payload, designed for the company’s Puma AE (All Environment) small unmanned aircraft systems – for both commercial and military applications. The new gimbal was announced at the Association for Unmanned Vehicle Systems International (AUVSI) XPONENTIAL 2016 conference and trade show in New Orleans.

“The Mantis i45 represents a dramatic leap in small UAS image resolution and approaches capabilities inherent in platforms many times the size and cost of Puma AE,” said Kirk Flittie, vice president and general manager of AeroVironment’s Unmanned Aircraft Systems business segment. “This enhanced capability enables commercial and military users to see more and farther, with greater detail, than ever before, make better decisions and perform their missions with greater certainty. The AeroVironment Mantis i45 represents a significant increase in performance for Puma AE intelligence, surveillance and reconnaissance (ISR) missions.”

Among its many enhancements, the Mantis i45 offers a wide range of night-time solutions, from low-light near-infrared (NIR) to long wave infrared (LWIR) imagers. In addition, it is a backward-compatible, fully waterproof payload capable of operating under the same harsh environmental conditions as the AeroVironment Puma AE system, which is designed for both land-based and maritime operations.

Like previous Puma AE payloads, the Mantis i45 retracts into the fuselage for launch and recovery to protect the gimbal during the highest loading portions of its operation. During flight operations, it provides full lower-hemisphere coverage and continuous zoom.

The AeroVironment Mantis i45 is highly configurable and can cater to a diverse set of missions. The modular hardware is capable of supporting a wide variety of imagers, enabling rapid development of custom configurations to meet future needs.

“With its increased capability, we worked to ensure the high reliability that our customers expect from the i45,” Flittie said, “and this design meets more rigorous standards than any previous Puma AE payload.” The fully waterproof design protects against sand, dust, rain, salt fog, snow, mud and 100 percent relative humidity conditions, and reliably withstands the shock loads that result from the precision deep-stall landings employed by the Puma AE.

Size, weight and power (SWaP) also were critical design considerations. A payload shell similar to that of the standard Puma AE payload houses the Mantis i45 and installs in an identical manner onto the Puma AE platform. “Even with its valuable new capabilities, the i45 is no larger than its predecessor,” Flittie said.

No modifications to the Puma are needed to incorporate the i45. Additionally, power- conscious processors onboard the i45 optimize power consumption, resulting in minimal performance impact to the Puma aircraft while delivering dramatically improved capabilities.

The gimbal open system architecture offers maximum flexibility to facilitate easy future expansion. Its design also supports a wide variety of camera formats, so new camera technology can be integrated into the system with minimal development.