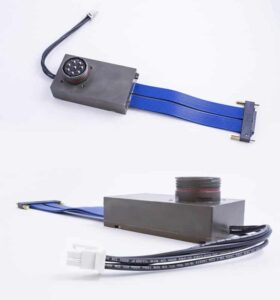 Amphenol Aerospace, a global leader in interconnect technologies, has added a new four-channel 10G-Base-T to XAUI connector converter to its current set of 10GbE products. The product facilitates the bi-directional protocol conversion of four channels of IEEE 802.3 XAUI through the appropriate PHY and transformer logic to IEEE 802.3 10G-Base-T.

Developed, integrated, and delivered for the rugged environments typically found in Military, Aerospace, and Industrial markets, qualification testing was conducted with test methods and limits for products fielded in aerospace applications. Most, if not all, of the relevant IEEE 802.3 standards are supported.

The four-channel converter utilizes Split Pair Quadrax contacts for 10G-Base-T system connections. Split Pair Quadrax is a derivative of standard industry Quadrax, but has improved signal integrity to support up to 6.5Gbps signaling. The contact is used to enhance the signal integrity of the 10G-Base-T interface. The product can support 10G-Base-T cable distances of 100 meters on CAT6A cable, or 30 meters on the same cable in low power mode. A power supply, two dual-channel 10G-Base-T to XAUI PHYs, Ethernet transformers, clocking, and an MDIO interface is contained within the connector unit itself.

There is no MDIO communication necessary to utilize the converter connector, but access over this channel to the PHY units enables users to change configuration or optimize the given links, in addition to retrieving data for built-in-test requirements. Power and ground inputs attach to the unit via a small connector and cable assembly. The sub-system interface is a dual-bank Samtec HQDP ribbon and connector that includes four channels of XAUI and the MDIO interface.

Other configurations are available including different shell rotations, alternate plating, power cable lengths, signal cable lengths, and others. In addition to supporting 10G-Base-T on the physical system side, the product also supports interoperability with IEEE standard devices operating at 10Base-T, 100-Base-Tx, and 1000Base-T. On the sub-system side, an SGMII MAC interface is also supported in addition to XAUI.

Jared Sibrava, Amphenol Aerospace High Speed Solutions Business Unit Director, says, “This product is a great and welcome addition to our products that support 10GbE. In addition to supporting various 10GbE and 40GbE products in high and low density over fiber optic protocols, we can now support system integrators who wish to utilize the 10GbE protocol, but do so over copper cables. IEEE 10G-Base-T is growing in use and becoming more accepted by aerospace manufacturers. By providing this rugged product to the market, communication between system components and internal MACs and switches becomes much more trivial.”

The product is stocked for prototype quantities by Mouser Electronics and is accompanied with test cables and test boards. This enables rapid integration into sub-systems.