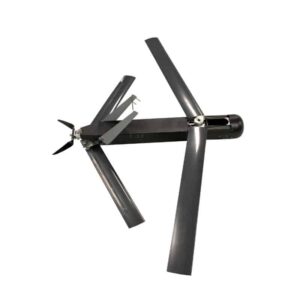 Raytheon has announced that it has provided its enhanced Coyote Unmanned Air System (UAS) to the National Oceanic and Atmospheric Administration (NOAA) for hurricane tracking and modeling, giving researchers an unprecedented perspective from inside storms that build in the Atlantic Ocean. The Coyote is a small, expendable UAS that can be tube-launched from a host vehicle on the ground or in the air.

A team of NOAA and Raytheon scientists will use the latest version of Coyote to monitor the track and intensity of storms. The team recently completed a successful calibration flight over Avon Park, Florida, where a Coyote was launched from a P-3 hurricane hunter aircraft to prepare for deployment during storm season.

“We’ve made significant improvements to Coyote. It can now fly for up to one hour and 50 miles away from the launch aircraft,” said Dr. Thomas R. Bussing, vice president of Advanced Missile Systems product line at Raytheon Missile Systems. “Raytheon technology is playing a key role in enhancing safety for hurricane researchers, and helping to deliver vital information about potentially deadly storms to the American people. Ultimately, that will save lives.”

NOAA successfully deployed a Coyote from a hurricane hunter into the eye of Hurricane Edouard in 2014, and intends to expand use of the vehicle this hurricane season.

“This successful flight gives us additional confidence that we will be able to use this unique platform to collect critical continuous observations at altitudes in the storm environment that would otherwise be impossible,” said Dr. Joe Cione, a hurricane researcher at NOAA’s Atlantic Oceanographic and Meteorological Laboratory and chief scientist of the Coyote program.