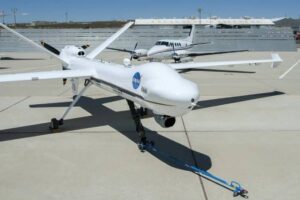 NASA has announced that, along with several of its industry partners, it has completed the third phase of tests on evolving technologies necessary for Unmanned Aircraft Systems (UAS) to safely avoid other aircraft. The technologies were put to the test using NASA’s remotely piloted Ikhana aircraft.

Equipped with a prototype system of Detect-and-Avoid (DAA) sensors working in concert with airborne and ground-based computers, Ikhana made 11 flights involving more than 200 scripted encounters with approaching aircraft.

Depending on the specific scenario, either Ikhana detected one or more approaching aircraft and sent an alert to its remote pilot to take action, or Ikhana itself took action on its own by flying a programmed maneuver to avoid a collision.

“We recorded some valuable data that will take some time to analyze fully, and we expect we’ll need to make some minor refinements to our algorithms, but from what we saw during the tests, the results look promising,” said Dennis Hines, NASA’s director for programs for Armstrong Flight Research Center at Edwards, CA.

Staged from Armstrong and flown over the high desert of California, the DAA research was designated FT3, the third in a series of flight test campaigns for NASA’s Unmanned Aircraft Systems Integration in the National Airspace System (UAS-NAS) project.

As a NASA industry partner, the company developed one of the three primary DAA sensors flown on Ikhana, in this case a prototype radar system. It also contributed Ikhana system and self-separation and collision avoidance alerting logic software.

ADS-B is a satellite-based navigation tool in which an aircraft determines its position and then broadcasts that information, enabling other nearby airplanes equipped with the same tool to know where everyone is in the sky.

As its name implies, TCAS keeps an electronic eye on the sky immediately surrounding an airplane. Should another airplane with a similar device fly too close, an alert will prompt the pilot to take action.

Honeywell also provided software that enabled the three sensors to work together, as well as a specially instrumented aircraft to play the role of an intruder encroaching on Ikhana’s airspace.

“This phase of flight tests, and our ability to meet the challenge of integrating UAS into the NAS, wouldn’t be possible without the strong partnership that exists between NASA and its aeronautical industry partners,” Hines said.

Knowledge gleaned from the data recorded during this third phase of UAS-NAS flight tests will not only help researchers plan the next phase of flight tests, but will also help inform organizations developing UAS-related operating standards.