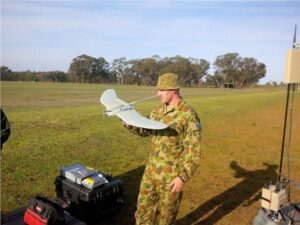 ADF placed an AUD $7.7 million order as part of an Army Soldier Modernization Trial procurement. AeroVironment received the order from XTEK Limited on behalf of the ADF.

Flittie added, “Increasingly, allied forces around the world are deploying our small unmanned aircraft systems for valuable, real-time situational awareness to help them operate more safely and effectively.” AeroVironment has delivered more than 25,000 new and replacement small unmanned aerial vehicles to customers within the United States and to more than 30 international governments.

The Wasp AE weighs 2.8 pounds, operates for up to 50 minutes at a range of up to five kilometers and delivers live, streaming color and infrared video from its pan-tilt-zoom Mantis i22 AE gimbaled payload. Launched by hand and capable of landing on the ground or in fresh or salt water, the Wasp AE provides portability and flexibility for infantry, littoral or maritime reconnaissance operations.