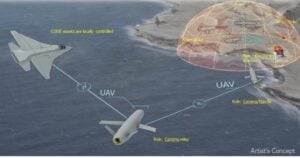 DARPA has announced the formation of a research program that aims to overcome the current limitations of unmanned aircraft systems (UAS), most of which require constant control by a dedicated pilot and sensor operator as well as a large number of analysts, all via telemetry. These requirements severely limit the scalability and cost-effectiveness of UAS operations and pose operational challenges in dynamic, long-distance engagements with highly mobile targets in contested electromagnetic environments.

DARPA’s Collaborative Operations in Denied Environment (CODE) program hopes to overcome these challenges by developing algorithms and software that would extend the mission capabilities of existing unmanned aircraft well beyond the current state-of-the-art, with the goal of improving U.S. forces’ ability to conduct operations in denied or contested airspace. CODE researchers seek to create a modular software architecture that is resilient to bandwidth limitations and communications disruptions, yet compatible with existing standards and capable of affordable retrofit into existing platforms.

CODE intends to focus in particular on developing and demonstrating improvements in collaborative autonomy: the capability for groups of UAS to work together under a single human commander’s supervision. The unmanned vehicles would continuously evaluate themselves and their environment and present recommendations for UAV team actions to the mission supervisor who would approve, disapprove or direct the team to collect more data. Using collaborative autonomy, CODE-enabled unmanned aircraft would find targets and engage them as appropriate under established rules of engagement, leverage nearby CODE-equipped systems with minimal supervision, and adapt to dynamic situations such as attrition of friendly forces or the emergence of unanticipated threats.

CODE’s envisioned improvements to collaborative autonomy would help transform UAS operations from requiring multiple people to operate each UAS to having one person who is able to command and control six or more unmanned vehicles simultaneously. Commanders could mix and match different systems with specific capabilities that suit individual missions instead of depending on a single UAS that integrates all needed capabilities but whose loss would be potentially catastrophic. This flexibility could significantly increase the mission- and cost-effectiveness of legacy assets as well as reduce the development times and costs of future systems.

“Just as wolves hunt in coordinated packs with minimal communication, multiple CODE-enabled unmanned aircraft would collaborate to find, track, identify and engage targets, all under the command of a single human mission supervisor,” said Jean-Charles Ledé, DARPA program manager. “Further, CODE aims to decrease the reliance of these systems on high-bandwidth communication and deep crew bench while expanding the potential spectrum of missions through combinations of assets—all at lower overall costs of operation. These capabilities would greatly enhance survivability and effectiveness of existing air platforms in denied environments.”

DARPA has released a Special Notice (http://go.usa.gov/JXFd) inviting interested parties to identify their interest in participation in select Phase 1 CODE meetings. DARPA is particularly interested in participants with capabilities, methodologies, and approaches that are related to CODE research and focused on revolutionary approaches to unmanned aircraft systems, autonomy and collaborative operations. Responses to the Special Notice will be used to select the participants and should not contain intellectual, confidential, proprietary or other privileged information.

Two meetings are currently planned: an Open Architecture Meeting and a Technology Interchange Meeting. The Open Architecture Meeting will review the requirements and approaches for making the CODE open architecture compatible with communication-constrained, distributed, highly autonomous collaborative systems. During the Technology Interchange Meeting, invited participants will present technologies for potential incorporation into the demonstration planned for Phases 2 and 3 of the program and ensure that CODE leverages the best available technologies from all possible sources.