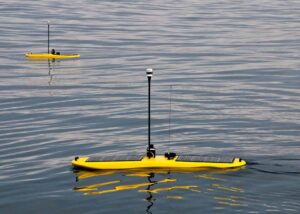 Battling estimated sustained winds of 145 mph and gusts to 175 mph, with waves over 45 feet, a Liquid Robotics Wave Glider® ocean drone positioned directly in the path of the storm successfully navigated and continuously collected weather data through the eye of Typhoon Rammasun (Category 5), one of Asia’s biggest typhoons in 40 years. Conducting a meteorological mission in the South China Sea, the Wave Glider was deployed for a week prior to first encountering Rammasun’s path on July 17th.

With seaports and transportation systems closed in multiple countries and caught squarely in the typhoon’s path, the Wave Glider was remotely piloted through the storm collecting and transmitting vital and rare, real time wave, temperature, conductivity and current data all from the surface of the ocean. Collecting current data to 100 meters and full directional wave spectrum data, this encounter gives scientists a unique picture of the horrific surface conditions during this type of event. Until the invention of the Wave Glider no vehicle could travel through and survive typhoon/hurricane class storms to collect surface data without severe risk to human life.

“Our mission in building the Wave Glider was to build a surface drone which could persist in the ocean for very long periods of time despite the ocean’s harshest conditions,” said Roger Hine, Founder and CTO of Liquid Robotics. “There is no truer testament to the Wave Glider platform than the persistence of its sensor payload through one of the most catastrophic storms in recent history.”

“There is no other method to study a storm of this magnitude from the surface of the ocean without an extreme high risk to human life,” said Gary Gysin, CEO of Liquid Robotics. “Scientists require this surface data to improve storm prediction models and early warning systems. The loss of life and property destruction from Typhoon Rammasun have only strengthened our resolve to instrument the ocean while our hearts are with those affected by this monstrous storm.”