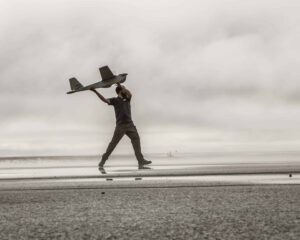 AeroVironment has announced that BP Exploration (Alaska) Inc., selected the company to provide mapping, Geographic Information System (GIS) and other commercial information services at its Prudhoe Bay oil field, the largest oil field in North America, for a five-year period.

AeroVironment deployed a comprehensive information solution incorporating its proven Puma AE UAS, equipped with either a custom integrated LiDAR (Light Detection and Ranging) or its standard electro-optical and infrared sensor payload. The sensor payloads produce imagery and data for processing into 3D computerized models of roads, pads and pipelines, and other actionable information, including precision volumetric measurement and topographic analysis of gravel pits at the North Slope field. Commercial UAS operations began on June 8, 2014.

“This is an important achievement for our joint team and for the industry in demonstrating the safe and effective use of our proven UAS technology for commercial applications. Our team has established a model for delivering this flexible and efficient information service, including back office data processing, to a wide variety of customers and industries throughout the world for whom better information, safety and reliability matter.”

AeroVironment’s extensive operational track record includes the production and delivery of nearly 25,000 new and replacement small unmanned aircraft with cumulative flight time estimated at more than one million hours. The company has delivered its small UAS to customers in the United States and in more than 30 allied nations.

As part of a comprehensive data collection, processing and reporting solution, AeroVironment integrated a LiDAR sensor payload into its battery-powered Puma AE UAS. AeroVironment’s expert UAS operators are now performing photogrammetry and LiDAR analysis to survey Prudhoe Bay infrastructure including the gravel roads, pipelines and a gravel pit. The Puma AE’s ability to fly low, at 200 to 400 feet above ground level, and slowly, at less than 40 knots, provides BP with highly accurate location analytics capabilities to help manage its complex. The Puma AE is capable of up to 3.5 hours flight time per battery and has a wingspan of about nine feet.

In one application, surveying the 200 miles of roadways built to support North Slope activities is critical to the effective operation of the Prudhoe Bay field. Drill rigs that traverse the roadways span up to 28 feet wide, 132 feet long and weigh up to 3.5 million pounds, with a driver at each end. The highly accurate LiDAR-produced maps delivered by AeroVironment’s Puma AE, along with precision GPS guidance systems, assist drivers in keeping moving drill rigs centered on the roadways, even in low visibility conditions.

The Puma AE UAS is well suited for operations in highly sensitive ecological areas because of its electric propulsion, low acoustic signature and small operating footprint. AeroVironment’s UAS services will help improve the safety and reliability of BP’s Prudhoe Bay infrastructure and maintenance programs, which accounts for about two-thirds of Alaska oil production.