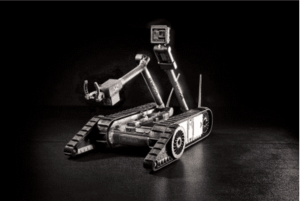 Robots have long been an essential component of industrial production and domestic law enforcement. Updated and multifunctional Unmanned Ground Vehicles (UGVs) are now delivering unprecedented support for military and other law enforcement activities. Some examples of these UGVs include:

Ethernet-based components are replacing custom-built computers, motion controllers used to control robotic arms, motion sensors, drive-by-wire, emergency stop and other elements in most of these unmanned devices. Increasingly, video streaming monitoring technologies becoming a driving force behind Ethernet because of its ability to handle large amount of traffic being sent back to central command. At the same time, industrial automation continues to travel the curve in increasing sophistication and applications.

In all cases, Ethernet is quickly becoming the standard for connectivity for most military and other rugged applications due to proven interoperability, reliability, and speed. Ethernet has proven itself as the communications standard of choice for a number of reasons:

What’s needed to connect these devices that use Ethernet as a communications platform is a rugged, small, light, power-efficient military-grade Ethernet switch that supports sophisticated applications. Additionally, in smaller and space-constrained vehicles, every square inch of space, every ounce of weight, and every watt of power becomes critical. Techaya is a prime developer, innovator and manufacturer of military-grade, rugged and tailor-made IP-based communications solutions. Techaya offers a series of Ethernet switches that are roughly the size of a credit card, specifically for UGV, UAV soldier-carry and other mobile applications where SWaP requirements are key. They include:

In June of 2013, Techaya appointed WLANmall as the exclusive distributor of its products throughout the United States.