kraken-sonar-systems-inc News By Caroline Rees / 30 May 2013 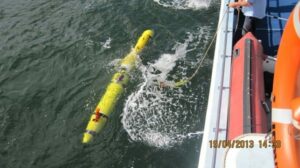 DSTO is a national leader in safeguarding Australia by delivering valued scientific advice and innovative technology solutions for the country’s defence and national security.

Thanks to the excellent cooperation with DSTO; the InSAS/AUV system integration, dockside testing and sea trials were completed in less than two weeks. Dockside tests were carried out in the shallow waters surrounding the HMAS Waterhen naval base in Sydney harbour, while deeper water tests were conducted from HMAS Creswell in Jervis Bay.

“We are extremely satisfied with the results from our sea acceptance testing with DSTO,” said Karl Kenny, President and CEO of Kraken. “AquaPix® met all expectations in terms of performance as well as the program delivery schedule and budget. Synthetic Aperture Sonar technology is a true breakthrough and will radically improve the efficiency and accuracy of seabed imaging for both military and commercial applications.”

AquaPix® provides higher resolution seafloor imagery at significantly longer ranges than conventional sonar. This is done by replacing traditional sonar hardware with sophisticated signal processing software. The principle of Synthetic Aperture Sonar is that the transducer array is “synthesized” in software by the coherent recombination of many sonar pings overlapping an area of interest.