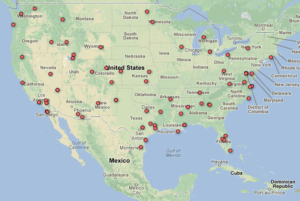 The Electronic Frontier Foundation (EFF) has posted several thousand pages of new drone license records and a new map that tracks the location of drone flights across the United States.

While the U.S. military doesn’t need an FAA license to fly drones over its own military bases (these are considered “restricted airspace”), it does need a license to fly in the national airspace (which is almost everywhere else in the US). And, as we’ve learned from these records, the Air Force and Marine Corps regularly fly both large and small drones in the national airspace all around the country. This is problematic, given a recent New York Times report that the Air Force’s drone operators sometimes practice surveillance missions by tracking civilian cars along the highway adjacent to the base.

The records show that the Air Force has been testing out a bunch of different drone types, from the smaller, hand-launched Raven, Puma and Wasp drones designed by Aerovironment in Southern California, to the much larger Predator and Reaper drones responsible for civilian and foreign military deaths abroad. The Marine Corps is also testing drones, though it chose to redact so much of the text from its records that we still don’t know much about its programs.

The capabilities of these drones can be astounding. According to a recent Gizmodo article, the Puma AE (“All Environment”) drone can land anywhere, “either in tight city streets or onto a water surface if the mission dictates, even after a near-vertical ‘deep stall’ final approach.” Another drone, Insitu’s ScanEagle, which the Air Force has flown near Virginia Beach, sports an “inertial-stabilized camera turret, [that] allows for the tracking of a target of interest for extended periods of time, even when the target is moving and the aircraft nose is seldom pointed at the target.” Boeing’s A160 Hummingbird (see photo above), which the Air Force has flown near Victorville, California, is capable of staying in the air for 16-24 hours at a time and carries a gigapixel camera and a “Forester foliage-penetration radar” system designed by the Defense Advanced Research Projects Agency (DARPA). (Apparently, the Army has had a bunch of problems with the Hummingbird crashing and may not continue the program.)

Perhaps the scariest is the technology carried by a Reaper drone the Air Force is flying near Lincoln, Nevada and in areas of California and Utah. This drone uses “Gorgon Stare” technology, which Wikipedia defines as “a spherical array of nine cameras attached to an aerial drone . . . capable of capturing motion imagery of an entire city.” This imagery “can then be analyzed by humans or an artificial intelligence, such as the Mind’s Eye project” being developed by DARPA. If true, this technology takes surveillance to a whole new level.

Another scary aspect of the Air Force’s drone program is the number of times Predator and Reaper drones have crashed. The Washington Post wrote about crashes at civilian airports abroad a few days ago, and the Air Force presents some statistics on actual incidents and the potential for crashes in New Mexico in a document titled “Operational Risk Analysis of Predator/Reaper Flight Operations in a Corridor between Cannon AFB and Melrose Range (R-5104A).” This document notes that “8 incidents [involving Predators] occurred over a period of 79,177 flying hours.” (p. 8). A risk analysis table from the report is below.

On a possibly lighter note, DARPA’s 2008 drone looks more like a modified flying lawnchair (see picture to left) than an advanced piece of technology. As DARPA notes in its application, this drone has been used recreationally, though probably with someone sitting in it.

Once again, we see in these records that law enforcement agencies want to use drones to support a whole host of police work. However, many of the agencies are most interested in using drones in drug investigations. For example, the Queen Anne County, Maryland Sheriff’s Department, which is partnering with the federal Department of Justice, Department of Homeland Security and the Navy, applied for a drone license to search farm fields for pot, “surveil people of interest” (including “watching open drug market transactions before initiating an arrest”), and to perform “aerial observation of houses when serving warrants.”

The Gadsden Alabama Police Department also wanted to use its drone for drug enforcement purposes like conducting covert surveillance of drug transactions, while Montgomery County, Texas wanted to use the camera and “FLIR systems” (thermal imaging) on its ShadowHawk drone to support SWAT and narcotics operations by providing “real time area surveillance of the target during high risk operations.” Another Texas law enforcement agency—the Arlington Police Department—also wanted to fly its “Leptron Avenger” drone for narcotics and police missions. Interestingly, the Leptron Avenger can be outfitted with LIDAR (Light Detection And Ranging) technology. While LIDAR can be used to create high-resolution images of the earth’s surface, it is also used in high tech police speed guns—begging the question of whether drones will soon be used for minor traffic violations.

More disturbing than these proposed uses is the fact that some law enforcement agencies, like the Orange County, Florida Sheriff’s Department and Mesa County, Colorado Sheriff, have chosen arbitrarily to withhold some or—in Orange County’s case—almost all information about their drone flights—including what type of drone they’re flying, where they’re flying it, and what they want to use it for—claiming that releasing this information would pose a threat to police work. This risk seems extremely far-fetched, given that other agencies mentioned above and in prior posts have been forthcoming and that even the US Air Force feels comfortable releasing information about where it’s flying drones around the country.

Interesting Drone Uses
Universities and state and local agencies are finding new and creative uses for drones. For example, the Washington State Department of Transportation requested a drone license to help with avalanche control, while the U.S. Department of Energy in Wyoming wanted to use a drone to “monitor fugitive methane emissions.” 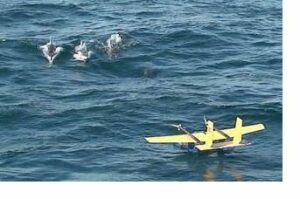 The University of Michigan requested one license for its “Flying Fish” drone—essentially a buoy that floats on open water but that can reposition itself via flight (check out the picture to the left of the drone with some dolphin)—and another license for its “YellowTail” drone, which is designed to study “persistent solar-powered flight.”

And while some proposed uses seem unequivocally positive—several agencies like the U.S. Forest Service and the California Department of Forestry want to use drones to help in fighting forest fires—other uses raise the problem of mission creep. For example, the University of Colorado (which the FAA said has received over 200 drone licenses) requested a license in 2008, not just to study meteorological conditions but also to aid “in the study of ad hoc wireless networks with [the drone] acting as communication relays.” And Otter Tail County, Minnesota wanted to use its drone, not only for “engineering and mapping” but also “as requested for law enforcement needs such as search warrant and search and rescue.”

Luckily, these records show the FAA is still vigilant about safety. The agency denied Otter Tail’s license application because the county couldn’t meet the FAA’s minimum requirements for pilots and observers and presented an “unacceptable risk” to the National Airspace System. The FAA also denied the Georgia Tech Police Department’s application because its drone—the Hornet Micro—was not equipped with an approved sense-and avoid system, even though Georgia Tech wanted to fly it in the middle of a major helicopter flight route.

However, once again, the records do not show that the FAA had any concerns about drone flights’ impact on privacy and civil liberties. This is especially problematic when drone programs like Otter Tail’s appear on first glance to be benign but later turn out to support the same problematic law enforcement uses that EFF has been increasingly concerned about. The FAA recently announced it wants to slow down drone integration into US skies due to privacy concerns. We are hopeful this indicates the agency is finally changing its views.

In the meantime, these records further support the need for full transparency in drone licensing. Before the public can properly assess privacy issues raised by drone flights, it must have access to the FAA’s records as a whole. It’s been over a year and a half since we first filed our FOIA request with the FAA, and we’re still waiting for more than half of the agency’s drone records. This is unacceptable. Also, law enforcement agencies with active drone licenses like the Orange County Sheriff’s Department should not be able to withhold all important information about their drone flights under a specious claim that revealing the information could interfere with a law enforcement investigation. If a huge federal agency like the US Air Force can be up front about when and how it’s using drones, so too should the large and small law enforcement agencies and other public entities around the country. Without this information it’s impossible to fully assess the issues raised by drone surveillance.