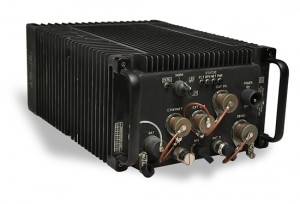 In a key milestone, Raytheon Company has demonstrated the Soldier Radio Waveform (SRW) on its new class of airborne and ground radio terminals, providing soldiers with another way to communicate across disparate networks.

During the demonstration, users were able to send voice and data traffic between Raytheon’s terminal and another soldier radio running SRW. Raytheon is moving through the Department of Defense’s Joint Tactical Networking Center’s (JTNC) certification process for waveform conformance, and the company plans to be at upcoming interoperability tests with the government.

Raytheon’s airborne radios are integrated on helicopters and unmanned aircraft. The ground radio system is called MAINGATE, or Mobile Ad Hoc Interoperability Network Gateway. It is targeted for the U.S. Army’s mid-tier network, for which it is under evaluation at this year’s Network Integration Evaluation (NIE) at Fort Bliss, Texas. MAINGATE, with NMW, has been in operational use with deployed forces for more than two years.

The latest radios are capable of running narrowband and networking waveforms as well as the future Mobile User Objective System (MUOS) waveform from the JTNC library. Raytheon recently provided its NMW into this same repository to facilitate interoperability with MAINGATE.