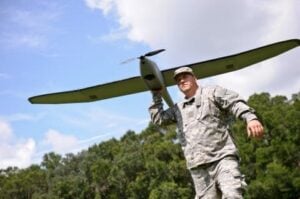 Altavian has announced that it has received a five-year contract from the U.S. Army Corps of Engineers to maintain and support its unmanned aircraft used for surveys and inspections in Florida and Puerto Rico.

The Army Corps’ Jacksonville District had a contract since October 2011 to use Altavian’s Nova aircraft embedded with high-resolution cameras to inspect levees, look for invasive species and monitor Everglades restoration and waterways.

The Nova is a 10-pound aircraft with a 10-foot wingspan that is launched by hand and flies a pre-programmed route to collect data and take high-resolution photos.

Under the new contract, Altavian will continue to maintain and provide support services for the aircraft and the embedded technology.

The company was founded in February 2011 by three graduate students from the University of Florida Unmanned Aerial Systems Research Group. It has 13 employees and plans to hire as many as 12 more with a training grant from FloridaWorks, said Thomas Rambo, chief operating officer.