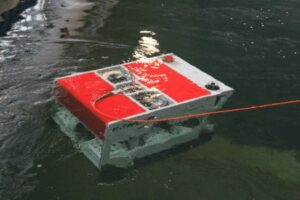 A new pressure-tolerant ROV named Erno2, designed by Enitech GmbH (Rostock, Germany), has been successfully tested within the framework of the “Pressure-tolerant deep-sea systems” project of Germany’s Federal Ministry of Economics and Technology (BMWi).

Driven by electric thrusters, the light vehicle easily manoeuvred above the seabed, streaming live video from over 4000 m deep with its 3 video cameras and LED lights.

The actual robot was attached to its tether management system (TMS) during the two-hour descent into the deep. It left the TMS 20 m above the seafloor and continued its journey being remotely controlled. A video- and data-link allowed the engineers to navigate the vehicle and monitor its behaviour. Both the TMS and the ROV were powered with batteries that can be recharged during the mission, so the ROV’s stay on the seafloor is in theory unlimited.

Less than 1 m wide, the 420 kg-heavy Erno2 is a relatively small ROV. All Erno2 equipment takes up only a half of the standard 20-foot container, making Erno2 one of the world’s smallest deep sea ROVs. Operating depths of 6000 m are possible due to the vehicle’s pressure tolerant construction.

To withstand the extreme pressure, all important ROV subsystems – the motor, the lights, all the sensitive electronics – are, instead of pressurized encapsulations, protected with elastic silicon molds. This new technique, developed at Enitech GmbH, is set to replace the oil-filled containers that were previously used for pressure compensation, and is to become the enabling technology for compact, lightweight, robust and cost-effective unmanned deep sea vehicles.

Enitech experts have been working on this deep sea technology since 2000. After developing pressure-tolerant thrusters and power supply systems for AUVs like DeepC and SeaOtter MKII (Atlas Elektronik, Bremen), Enitech GmbH came up with their own vehicle – the Erno2 – that was now successfully tested in on several deep sea missions. The ROV was co-financed by the government’s R&D project, so the small company from Rostock can now manufacture commercial products based on the tested components for cost-effective deep sea AUV and ROV equipment.

The new components were, among others, used for an autonomous underwater vehicle (AUV) PreToS. The PreToS, also built within the “Pressure-tolerant deep-sea systems” project framework, delivered an excellent performance last year during its first trials in the Baltic Sea.

As project coordinator, Enitech GmbH works in close cooperation with EvoLogics GmbH (Berlin) on underwater communication systems, as well as with the Berlin Technical University (Technische Universität Berlin – TU Berlin) and the Leibniz Institute for Baltic Sea Research (Leibniz-Institut für Ostseeforschung Warnemünde – IOW). TU Berlin engineers, among others, designed the hull and the titanium frame of the PreToS AUV, that, with Enitech’s pressure-tolerant silicon components, is also able to submerge to up to 6000 m.

The PreToS AUV’s first deep sea mission in the Atlantic is scheduled for early 2013. During its first operation, the AUV is to conduct three-dimensional mapping of an underwater current at the Azores. In fall 2013, the PreTos is planned to come back to autonomously map and photograph the seabed at 6000 m, accompanied by Erno2 for support and emergency.